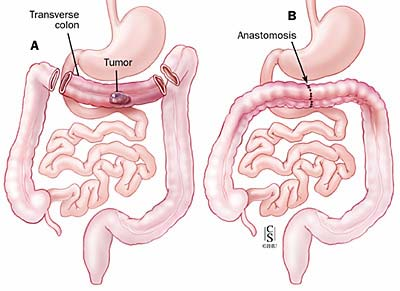 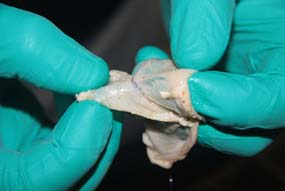 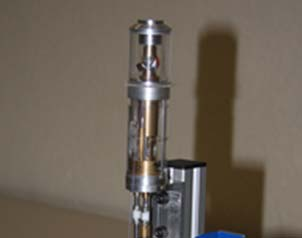 A common procedure in the treatment of cancer of colon, which has big incidence in occidental population, is the union of the two extremes of intestine after removing a tumor (see image 1). This procedure, called anastomosis can be done in two different ways:

·  With manual suture, where the surgeon sews with special yarn and needle the ends of the intestine in a complex and long procedure.

·  Using a surgical stapler (special mechanic device) that unites the two extremes with metallic staples.
However, the hand suture is really difficult (needs highly skilled surgeon) and is slow, increasing significantly the infection risk. On the other hand, the metallic staples are not absorbed by the organism, creating a ring in the intestine with poor elasticity, really below the rest of intestinal tissue, so this can create obstructions that can appear during the rest of the life of the patient.

This new technology consist on a surgical manipulator device focused in the improvement of surgical interventions with anastomosis. These interventions consist basically in doing a cross-cutting of a tubular tissue (usually the intestine) removing a piece of it and uniting again the resulting ends. The device unites the two extremes of the intestine by means of a sewing with absorbable yarn, doing it fast, automatically and in a robust way, under supervision of the surgeon. Thus, improving the quality of life of the patient and reducing the risks associated to the surgery intervention. On the other hand, the device handling is very similar to the existing stapling devices commonly used, therefore diminishing the training of the surgeons.

A real size prototype device has been designed and built. A proof-of-concept test with pig intestine (very similar to human intestine) has been carried out, being evaluated as successful by the surgeons assessing the project.
Additional development is required for reduction of external actuators in the prototype as well as additional tests (starting the legal roadmap to introduce it in the market).

The target market is defined by replacing the use of stapling devices, currently used in almost all the anastomosis interventions for cancer of colon (the 3rd with more incidence worldwide, with more than 1.000.000 new cases per year).

This automatic device will avoid the disadvantages of the existing methods: it will do a fast sewing suture with yarn that can be absorbed by the organism, thus keeping the affected zone elastic after the intervention. This will avoid obstruction problems and also will improve the regeneration of the tissues in the sewed zone. The device will consist on a fixed part and a disposable part, which means that the total costs could be very similar to the current devices.

Currently, cytologists are needed to examine smear samples under a microscope to visually assess the shape, size and stain pattern and determine if abnormal cells are present which could indicate cervical cancer. Alternatively, automated image analysis is used to determine nuclear density but cytologists are still needed to determine the presence of abnormal cells. The current processes are prone to human error and misdiagnosis can be up to 60%. They are also time consuming and costly.Sample user interface for spectral acquisition and classification. Researchers at DIT have invented an easy to use, low cost, automated analyser that uses a pre-defined library of known cell signatures and a proprietary classification algorithm to detect abnormal cells with an accuracy of 99%. The analyser can be used with a regular microscope, an image analyser or as a point-of-care system with results displayed using an intuitive user interface. The image and the classification can be saved in digital format, stored in a national database, and sent to the medical team or experts worldwide

Spanish research group from the department of Inorganic Chemistry the University of Alcala, together with a Moroccan research group from the University of Abdelmalek Essaadi, have developed a process to synthesize metal complexes with anticancer properties, which can be used for cancer treatment and prevention. The group is looking for companies working in the pharmaceutical and biomedical sector to achieve license, collaborative or commercial agreements with technical assistance.

U-learn is a training and learning model for radiographers and registrars for training in breast ultrasound imaging. The model assesses the performance of a trainee registrar before, during, and after training using the ultrasound imaging phantom which is a realistic representation of the breast.

Walker for the mobility of people with motor disability.

A research group from the Signal Theory and Communications Department of Alcalá University has developed a disability walker for improving the mobility of people with motor disability. This walker includes a guide for the leg together with an electronic system, that improves the user of manoeuvrability allowing the configuration of basic actions. This invention is part of the "Loyalty Technological Program," which has been designed by the research group to raise funds for the development and adaptation of technical aids that improve the quality of people life with motor impairments. The group is looking for collaboration agreements with institutions or companies that want to be part of the "Loyalty Technological Program" http://padrinotecnologico.org/proyectos/instituciones/ Moreover, the group is interested in reaching license, collaboration, manufacturing or commercial agreements with technical assistance with orthopaedics, medical equipment, and health technology companies. Other kind of institutions interested in sponsoring this invention are also welcome. 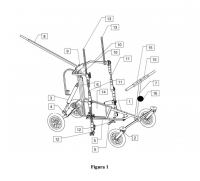 The present invention provide a seat cushion for an individual suffering from loss of sensation in the buttocks but having sensation in higher regions of the trunk. The cushion may be used, for example, in individuals who have undergone spinal cord injury (SCI). The cushion of the invention provides tactile stimulation to regions of the surface of the individual’s body where the individual has retained tactile sensitivity (e.g. above the SCI level) to induce the individual to shift his sitting position. The cushion thus provides tactile sensory compensation, by transferring the sense of weight-bearing pressures from an insensitive body site which bears bodyweight loads (e.g. a body site affected by a neural injury) to a different, sensitive site which is not necessarily weight-bearing at the time. By repetitively shifting the location of the tactile stimulation, the cushion promotes frequent changes in posture, which tend to reduce the risk of pressure ulcers. Project ID : 8-2011-265