The CSIC has developed the production of an emerging nano-cellulose biomaterial from autotrophic bacteria, with growth from a single inorganic carbon source (eg atmospheric CO2), for use in biomedicine, food, packaging, and potentially in the production of biofuels.
Industrial partners from the field of biotechnology, pharmaceutical, food, biofuel and packaging, are being sought to collaborate through a patent licence agreement. 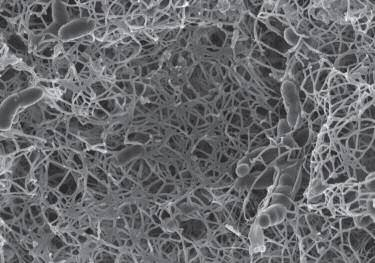 Autotrophic Nanocellulose Production System The invention relates to the production, for the first time, of bacterial nanocellulose through a chemoautotrophic process, where specific strains extracellularly produce pure nanocellulose during their growth with inorganic carbon (carbon dioxide). They can also produce it in a heterotrophic process from organic carbon (glucose, crude glycerol, naphthalene, among many others). The biofilm produced has a typical structure of bacterial nanocellulose, with a three-dimensional network of nanofibers of approx. 70 nm in diameter and several microns in length. The biofilm is obtained under microaerophilic conditions, although they can be flexible and adapt to the carbon source used. The method includes a simple process of purifying the biofilm from the extracellular medium.

Scanning electron microscope image of a biofilm produced by the deposited strain, grown in PBT culture medium with bicarbonate (CO2) as the sole carbon source

We have isolated a new strain with a high capacity for nanocellulose synthesis regardless of the carbon source used for its growth · This strain is deposited in the · Spanish Type Culture Collection and has improved characteristics in nanocellulose production compared to other strains.
The strain can produce nanocellulose autotrophically from · CO2, and also very efficiently from different types of waste, including raw glycerin remains from biodiesel production · The cellulose produced is extracellular, is essentially pure, and does not require complex purification processes.
This nanocellulose is susceptible to functionalization for the production of all kinds of composite materials.