With this SmartCities Solution, the goal is to have a tool capable of knowing the movements of people and vehicles in different parts of the city. In this way, it will be possible to evaluate compliance with the measures adopted and implement improvements in them, if necessary. 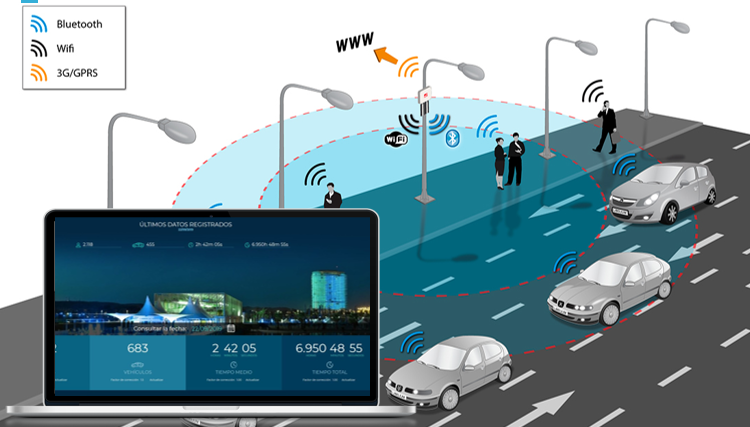 With this SmartCities Solution, the goal is to have a tool capable of knowing the movements of people and vehicles in different parts of the city. In this way, it will be possible to evaluate compliance with the measures adopted and implement improvements in them, if necessary. This system could serve as a deterrent strategy for uncivic behaviour that does not respect the restrictions of confinement.

The control effectiveness of a police patrol guarding a street is limited to the action time of that unit; with a technology installed 24 hours, this surveillance can be done in real time and would allow crossing data with users detected in other locations.

How does the solution work?

The system is composed of a single type of sensor installed in different points of the city, which are capable of detecting WiFi and Bluetooth signals emitted by mobile devices of people and vehicles. The sensor allows to detect iPhone and Android devices and, in general, any device that works with WiFi, BLE or Bluetooth interfases.

It is detected without the need to be connected to a specific access point, allowing the detection of any smartphone, laptop or hands-free car kit device that enters the sensor coverage area (approximately 100 meters).

The idea is to be able to measure the number of people who are present at a certain point in a specific time, allowing the study of the evolution of the flows of people. This solution allows public managers to control the times of passage, entry and exit, as well as the total time that they have remained in the space.

Thanks to this solution, it is possible to draw up occupation reports and to anticipate possible problems of agglomeration. All data is finally shown at a visualisation platform where the user could have graphs that show the evolution over time of the movement of people in different areas of the city, generate alerts if a certain influx is exceeded or warn if an agglomeration is occurring.

It can also be a useful tool to know after the current state, what trends or habits of movements are generated. The user can also estimate, based on past data, the flow that will be at a point in the next few hours. As the device can move, it can be treated as a "mobile people radar" that is placed according to the needs that are identified in different areas of the city. The system could also be connected to police stations or medical authorities to detect areas with a certain saturation of pedestrians and/or vehicles at a given time.