A new system of seawater desalination has been developed, consisting of a solar heat collector made of a transparent film surface in a pyramidshaped tent and another dark one (to retain the maximum amount of heat) material inner truncated pyramid parallel to the former, generating a layer of heated air. Heat accumulates at the vertex, where high temperatures are achieved. This allows the evaporation of seawater injected by micronebulizers, resulting into moisture-laden air being pulled by a central axial tube leading to a 'cold spot' located underground. Here a network of galleries, filled with the stored water, provides cold temperature to dissipate heat and to condense the steam into pure water. Partners to further develop the technology and/or to establish commercial agreements along with technical cooperation are sought.

A new system of seawater desalination has been developed, consisting of a solar heat collector made of a transparent film surface in a pyramidshaped tent and another dark one (to retain the maximum amount of heat) material inner truncated pyramid parallel to the former, generating a layer of heated air. Heat accumulates at the vertex, where high temperatures are achieved. This allows the evaporation of seawater injected by micronebulizers, resulting into moisture-laden air being pulled by a central axial tube leading to a 'cold spot' located underground. Here a network of galleries, filled with the stored water, provides cold temperature to dissipate heat and to condense the steam into pure water. Partners to further develop the technology and/or to establish commercial agreements along with technical cooperation are sought. 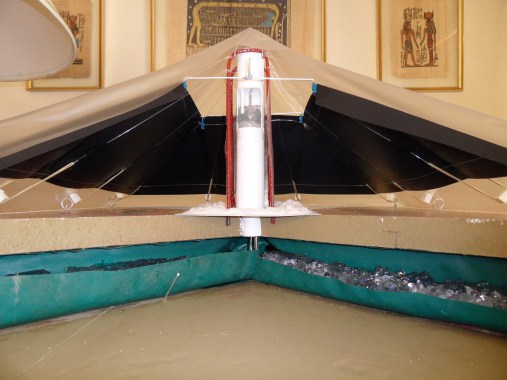 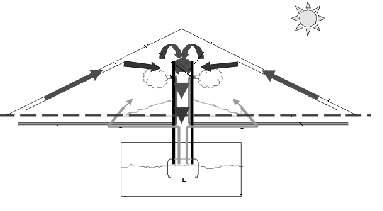 Desalination of seawater is a tool that can now enable the production of fresh water with no other restriction than the energy required to separate the salt contained in it. This currently takes place by reverse osmosis or other procedures that involve large economic costs for the amount of energy required and the cost of the existing plants.
Given that the places and times fresh water is most needed are also the places and times that the most sunlight is available, this system, based upon capturing the sun's heat, allows us to use sunlight to vaporize and distil sea water. An underground reservoir of cold water galleries provides the ‘cold spot’ where water condenses and is stored.

Vaporization of water yielded relies on the interchange temperature between water and air where it takes place. By means of the pyramid-shaped tent an efficient concentration is achieved at its vertex. Here, micro-nebulizers provide the maximum contact surface between water and air at a high temperature. Having an extra space to reach the axial vertical condensation tube that absorbs the moist air, salt drops (which are far more dens than moist air) dry as they fall. The moisture rich air is absorbed by the distillation column where, by means of the cold sea water that feeds the system and by the cold water stored underground, a full drying out of the air is achieved. The dried air returns to the inner area of the pyramid through its own pressure.

The calculations and the design of the elements of the system have been worked out. Contact with companies willing to provide the necessary elements has already taken place. Implementation would not surpass three months of time.

This technology represents an important advancement in energy savings since the main thermodynamic work relies upon the sun’s heat energy (except for a small amount of electrical energy for the overall system that can be provided by photovoltaic panels). The investment for the whole system is much less than for other existing technology.
Other elements for yield maximization are considered by means of continuous computerized self-monitoring of the device via custom software.
The system is targeted to any country where water shortage is a limitation for rural, human or touristic development, is close to sea, and has high sun radiation. This applies to more than 40 countries worldwide. The system can also be installed offshore.

• Electrochemical technology enhances performance in many aspects of currently technologies (thermal regeneration), as already described above. It is characterized by a high efficiency, sustainability and more economical than conventional technologies. • It is therefore a real promising alternative that offers a great business opportunity in the growing market of activated carbon regeneration.

This device allows a faster diagnosis, more efficient and more economic than the alternative proceeding. Its design allows obtaining reliable and accurate information on the degree of fouling and biofouling that membranes of the unit are developing without sacrificing any of them. Its quick placement and removal allows distribute these devices in the facility to improve the management of the facility. It is possible even operate with difference type of membrane for doing comparative studies of resistance to fouling with a view to introducing future changes of the type of membrane in the desalinization plant

Innovative process for the removal of persistent organic pollutants present in wastewater streams.

This is the first time that surfactants-based aqueous phase segregation has been proposed for the remediation of aromatic organic pollutants. Up to know, biological degradation was used alone or in combination with other physical and chemical methods (e.g. volatilization, sorption, electrokinetic, oxidation, extraction with supercritical fluids, etc.), that often entail economic and environmental disadvantages. Therefore, the proposed strategy is an environmentally friendly alternative that entails benefits such as low energy consumption, low cost, availability of reagents at bulk quantities and easy implementation.

Advantages of the technology: - Our method is sensitive, reproducible, species-specific and inexpensive way to detect Cryptosporidium sp. oocysts ad Giardia intestinalis cysts in various environmental samples. - There is not necessary to use highly specialized and expensive equipment. All the materials for realizing the invention (chemical reagents and equipment etc.) are commercially available. - It is not requirement the use of toxic flammable solvents to ensure the safety of personnel conducting the test. - The use of appropriate materials, allowed to simplify and shorten the work, to improve the reproducibility of detection and reduce the cost of detection procedure. - To achieve sensitive detection method allows subjecting the examination of much smaller volumes of liquid samples in comparison with that provided by the USEPA protocols (United States Environmental Protection Agency).

The invention solves the problems of inefficiency which usually shows the conventional passive treatment systems. The reactive fills developed for the removal of inorganic contaminants historically have focused on removing low concentrations of these (typical features of coal mining), however when these fillers are faced to high concentrations of metals (sulfur mining, uranium, industrial water waste…) quickly clogging and loss of reactivity occurs. The present invention allows the removal of metals without clogging and/or loss of reactivity. This is achieved by the use of a coarse inert material with high surface mixed with a fine-grained reactive material, so that the surface of the inert material is breaded with reactive material. Coarse fragments of inert material act as a frame, providing large pores that reduces clogging by precipitates. The small particle size of the reactive material provides a large surface area that increases its reactivity.