The Ukrainian Laboratories in partnership with Chuiko Institute of surface chemistry presents a method for synthesizing a new Sol-Densil material that can be used in various systems: as a filler of varnishes and paints, polymers, etc., to provide antibacterial and other properties (characteristic of salts, metals, oxides, due to Densil's modification) of finite materials ; component of extinguishing powders; base of ice-forming reagents for deposition of supercooled mist and clouds; for the production of drugs with sorption activity. The resulting product has a lower dust formation, a lower degree of gelling compared to existing ones. The Institute seeks to cooperate with the production partners for obtaining a license agreement, a commercial technical assistance agreement or a joint venture agreement, as well as research institutions for the conclusion of an agreement on scientific and technical cooperation. 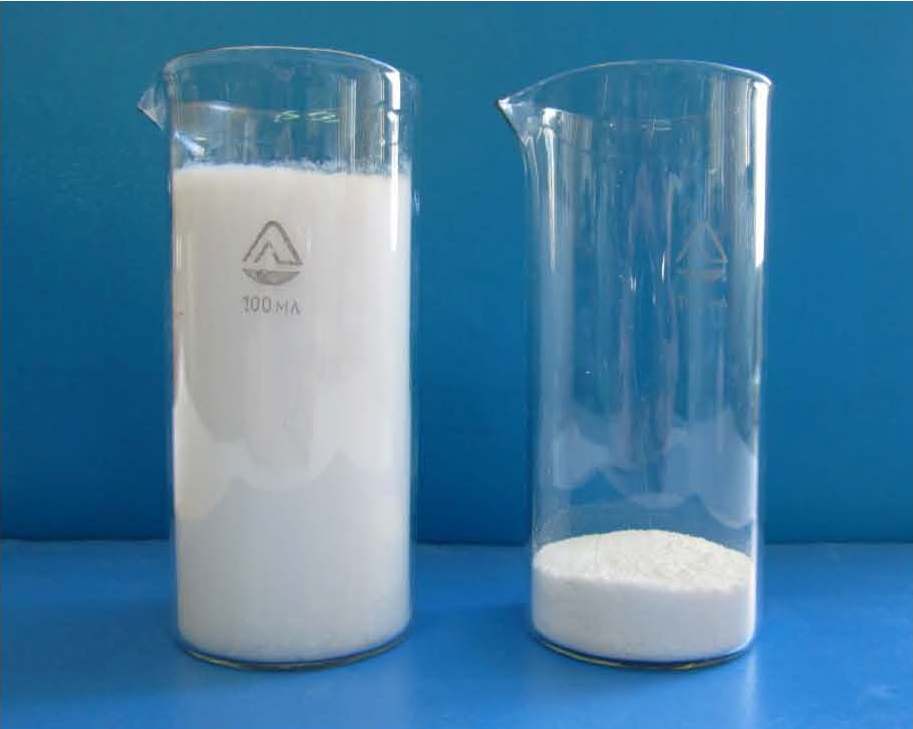 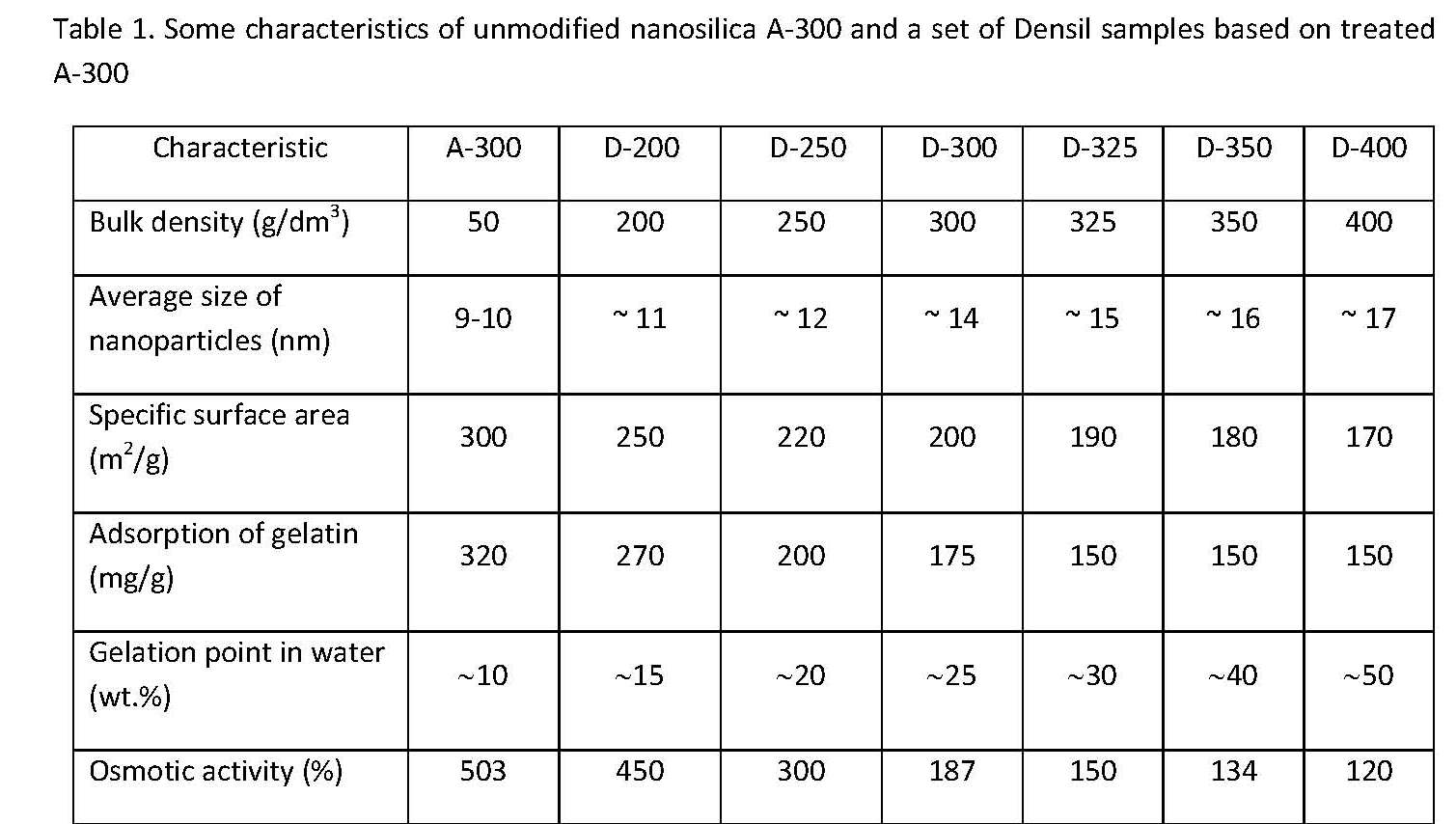 To improve some properties of FMO (e.g. to reduce the dust-forming effect), we developed nanosilica-based materials Densil and Sol-Densil using a method of geometrical modification of silica.

Densil is a product of the geometrical modification of nanosilica mechanically treated in the gaseous dispersion media. This modification results in strong changes of the material with respect its macro- and micro-levels (Table 1). The most obvious change deals with changes in the bulk density of the material(Fig.1).

The characteristics of Densil could be varied depending on the modification conditions (Table 1).

A low thickening power of Densil is an important characteristic. The gelation of the aqueous suspension of Densil could occur at the content of ca. 50 wt.% (Table 1). This property allows to prepare highly Densil-filled of polymers.

Lower osmotic activity and high gelation point of Densil in comparison to unmodified nanosilica provide perspectives in the use of Densil as a medical sorbent for purification of wounds. It can be used both on the first and second stages of the wound treatment with no a risk of wound over-drying and formation of inpervious tight films on the wounds.

Sol-Densil is a modified Densil, which can be surface covered by a sub- or monolayer or clusters of inorganic salts, metals, e.g. silver nitrate, silver iodide, metallic silver, copper sulphate or oxide, sodium chloride or phosphate, etc. The surface modifiers in Sol-Densil are in highly disperse, nanosized state (Fig. 2)

Sol-Densil could be applied in various systems as:

The pilot technology was developed to produce nanomaterials Densil and Sol-Densil.

There are the regulatory documents:

Available for demonstration, there are test samples and lots

Products developed on the base of Densil and Sol-Densil

Powdered ice-forming reagent for weather modification by cloud seeding, as well as to prevent hail

According to the order of S.R.L. "Protect-Grindina" (Moldova), a pilot batch of powdered ice-forming nanoscale reagent (AgI (10 wt.%)/SiO2, amount of 10 kg, Fig. 3) was prepared to carry out the natural experiment.

A nanocompositeAg/SiO2 (Fig. 4) was created and studied. Its structural and antimicrobic characteristics were studied. It possesses high anti-microbic properties with respect to gram-negative and gram-positive micro-organisms. With respect to the amounts of pure silver and the effects on the formation of planktont, this composite is worse than pure silver nitrate. However, it is better with respect to the formation of biofilms. This suggests that the composite is characterized by prolonged bio-activity in comparison to silver alone.

- Savchenko D. S. Experimental justification of antimicrobial and sorption activity of enterosorbent with nanosilver. – The thesis for a Candidate of Pharmaceutical Sciences Degree by the speciality 14.03.05 – Pharmacology. – National University of Pharmacy of Ministry of Healthcare of Ukraine, Kharkiv, 2014. (in Ukrainian)

Thus, Densil as a filler can be used not only for medical applications but also to improve the physicomechanical characteristics of polymer matrices filled up to 20 wt.% of developed nanofillers. 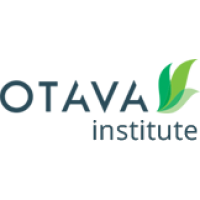 Otava Institute is a global provider of one-stop integrated research solutions for business and life science. Our team includes chemists, biologists, physicists whose combined efforts contribute to the complex contract research projects for pharmaceutical, agro, cosmetic and material science industries.We are dedicated to providing clients with outstanding service in these key areas and will continue to push boundaries to remain an industry front-runner. Each day we expand our core competencies delivering of new technologies to meet all the customer’s needs.

Our location in Toronto Ontario, Canada provides our clients with the added advantage of North American IP rules and regulations and secure communication and logistics. Our Ukraine – based R&D facilities represented with the Ukrainian Laboratories, that is cooperating with leading Ukrainian research institutions and carries out research work in the format of outsourcing.

We work as a preferred partner to many of the world’s top 10 pharma firms, and hundreds of other companies, providing support with creative solutions for complex technical compound issues. Our scientific knowledge, combined with our research and manufacturing capability, enables us to support chemical processing and production without ever compromising on quality.

Our experience, dedication, and commitment to quality make us an ideal partner for discovery stage research.

Send a request for information
to Otava Research Institute