A research group from the Department of Architecture of the University of Alcalá (Spain) has developed a ventilated facade system characterized by the incorporation of a folded sheet placed in the middle of the section, which acts as a structural element of the façade and holds the rest of the materials and constituents of the facade. The sheet is folded forming ribs on both sides of the sheet, strengthening the façade and producing suitable modulations for both fixing the outer finishing material and transmitting the loads (own weight and horizontal actions) to the structure of the building by means of fastening elements located in the edge of the floor slab.

The group looks for companies in the building sector and manufacturers of facade systems to sign technical cooperation agreements, commercial agreements with technical assistance and patent licensing agreements. 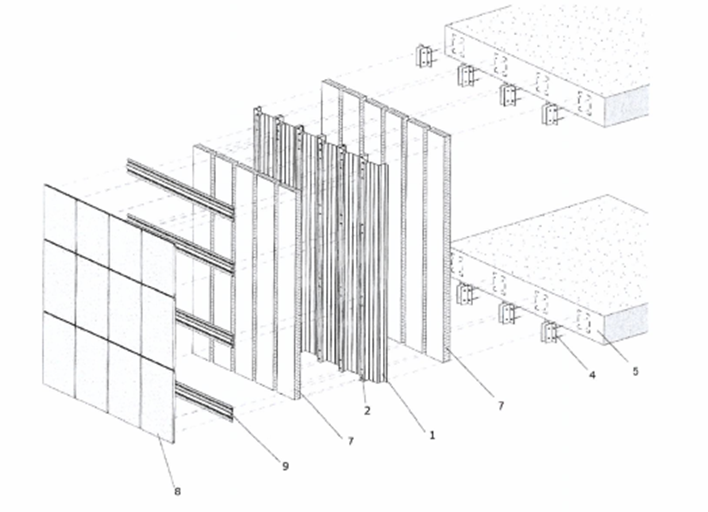 The present invention is a novel ventilated facade solution incorporating a continuous folded sheet in an intermediate position that acts as a structural element of the facade by forming ribs on both sides of the façade. Besides, the continuity of the sheet supplies mechanical continuity and protects the inner layers of the façade, especially in case of climatic events, such as strong winds or earthquakes.

The ribs of the sheet, which are produced by vertical folding of a continuous sheet, are made on both sides of the sheet, following a modulation that can be the same on both sides or different. The ribs on the inner face of the facade increase the rigidity of the facade and transfer the loads applied to the facade, gravitational and horizontal, to the structure by discrete fastenings directly to the floor slabs. On the other hand, the outer ribs allow the placement of the external finishing material of the facade either by means of fixing elements or by horizontal linear elements fixed mechanically to the outer ribs, forming a ventilated chamber.

In addition, the gap between the inner and outer ribs is used to place an insulating material on both sides of the sheet, being advisable that the insulation in the interior has a hot face vapor barrier to reduce the risk of interstitial condensations. Thermal bridges are avoided, as the inner and outer ribs do not coincide. On the other hand, the joints between sheets by the overlap of two or more sheets at the ribs and therefore can be fastened by the side of the ribs to the fixing points to the floor slab by means of mechanical fastenings.

Finally, with this ventilated facade system the overall mechanical stiffness of the façade is improved as a result of the inclusion of the folded sheet, increasing the mechanical resistance of the assembly against horizontal actions, especially those produced by extreme climate events, such as strong winds, earthquakes or other, increasing the post-event resilience of the facade. Also, the continuity of the sheet will avoid that a fastening failure means the collapse of the facade due to loss of mechanical capacity.