Heterogeneous NCH complex of palladium and their uses as recoverable catalysts.

AA research Group from the Department of Organic Chemistry and Inorganic Chemistry at University of Alcalá (Spain) has designed catalysts suitable for organic synthesis processes based on supported N-heterocyclic carbene (NHC) complexes of palladium, which are magnetically separable after their use, reusable and resistant to metal leaching, and useful in carbon-carbon coupling reactions. The group is looking for companies in the chemical and pharmaceutical sectors to reach licensing agreements or collaboration and commercial agreements for technical assistance.

Heterogeneous NCH complex of palladium and their uses as recoverable catalysts./technology-offers/2870/heterogeneous-nch-complex-of-palladium-and-their-uses-as-recoverable-catalysts

AA research Group from the Department of Organic Chemistry and Inorganic Chemistry at University of Alcalá (Spain) has designed catalysts suitable for organic synthesis processes based on supported N-heterocyclic carbene (NHC) complexes of palladium, which are magnetically separable after their use, reusable and resistant to metal leaching, and useful in carbon-carbon coupling reactions.
The group is looking for companies in the chemical and pharmaceutical sectors to reach licensing agreements or collaboration and commercial agreements for technical assistance. 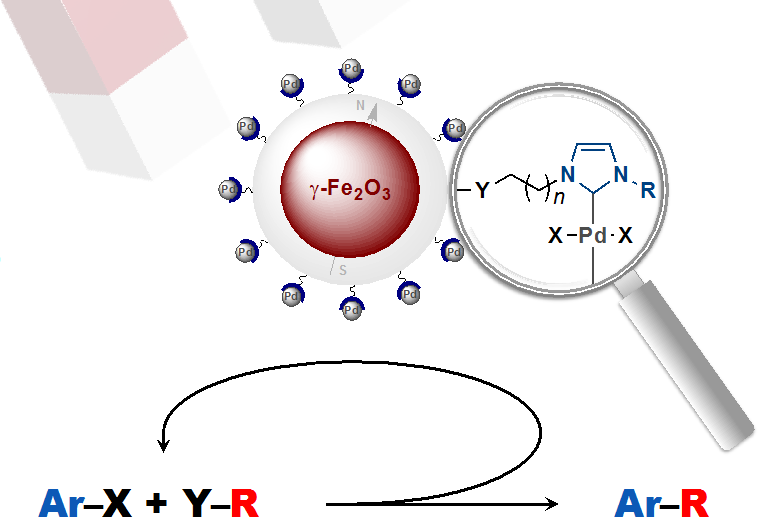 These catalysts are well defined, and after their use are easily separated from the products without degradation, they can be reused and do not contaminate the product with leached palladium, resulting in products of the catalysis with contents of less than ten parts per million, and sometimes even in the order of parts per billion, after magnetic separation of the particles.

- Activity under mild conditions and in aqueous media.

- Robustness of the catalyst, which leads to a very high productivity.

- Ease separation from the catalytic products.

- Very low levels of palladium leaching, leading to products in which further work up to eliminate that metal it is not necessary.

Specifically, this invention involves the synthesis of (NHC)palladium complexes (PCs) with suitable substituents for their covalent grafting onto magnetic nanoparticles (MPs), resulting in nanomaterials containing the supported complexes (CMPs) as unique and well defined species of palladium tightly bound to the support. The CMPs give rise to stable dispersions in water and catalyze carbon-carbon bond formation processes in aqueous medium under mild conditions.

The technical problem solved by these materials is, on one hand, that the superparamagnetism of the CMP-core allows their complete and easy separation from the products at the end of the reaction by applying a magnetic field, and, on the other hand, that the design of the supported catalysts allows their recovery without appreciable degradation, they can be reutilized reaching very high values of TON (turnover number), and do not suffer metal leaching, or it is negligible, resulting in catalytic products with palladium contents below ten parts per million –in certain cases in the order of parts per billion- after the magnetic separation of the particles.

The MPs used as supports are commercially available and they are characterized by diameters in the range of tens to hundreds of nanometers, by an iron oxide core, and by an inert coating such as silica or polystyrene.

The general immobilization procedure involves condensation reactions, preferably towards the formation of siloxane or amide groups, between the PCs and the corresponding MPs dispersed in organic solvents, or preferably in an hydroalcoholic medium in the presence of small amounts of nonionic surfactants with high hydrophobic-hydrophilic balance (HLB > 15, used below the critical micelle concentration), in the presence of a carbodiimide as a coupling agent, the addition of the PC dissolved in a very polar solvent, a constant mechanical stirring, and a sequence of washings comprising the trapping of the CMPs with an external magnet and the decantation of the solutions.

The present invention also concerns the uses of CMPs in carbon-carbon coupling reactions, particularly Mizoroki-Heck and Suzuki-Miyaura with aryl halides, dispersed in an aqueous medium and under mild conditions, and their reutilization as catalysts after effective separation of the products by an external magnet. Their kinetic profiles (% conversion vs. time), their recyclability in successive tests of catalysis-recovery-reuse, the endurance of their properties in the recycled series and the leaching suffered by the CMPs in them, have been analyzed.

The essential features of the CMPs of the present invention are: they catalyze carbon-carbon coupling reactions under mild conditions, they are easily separated from the reaction medium, can be reused in series of numerous recyclings, and are very robust to degradation and hardly suffer leaching of palladium.

Commercial cooperation or licensing agreements with chemical and pharmaceutical companies.

The present invention presents the following advantages in relation to the existent technologies: the materials prepared by this methodology are efficient heterogeneous catalysts in the asymmetric benzoylation of 1,2-diols, and eventually in other asymmetric organic transformations, can be easily filtered at the end of the liquid phase reaction and reused in more catalytic cycles without loss of catalytic activity and enantioselectivity.

The present invention relates to a process for the preparation of nanosilver and nanogold using an aqueous extract of dog rose, white grape and knotweed. Substances which were extracted from these plants act both as reducer of silver and gold ions and stabilizing agent of forming silver and gold nanodispersion, preventing them from agglomeration and inhibiting their growth, so that the resulting particle size does not exceed 100 nm.

Disposable electrodes based on filtered nanomaterials.

A Spanish research Group from Analytical Chemistry, Physical Chemistry and Chemical Departments at University of Alcalá (Spain) has designed and developed different disposable electrodes constituted exclusively by conducted nanomaterials for analytical measurement of electroactive molecules for (bio-) sensoric in relevant areas such as health, agri-food and environmental. The group is looking for companies in the chemistry, clinical, agri-food and environmental sectors to reach licensing agreements or collaboration and commercial agreements for technical assistance.

Procedure for the extraction of biosurfactants contained in corn steep liquors

Nowadays, most of the pharmaceutical and cosmetic products in the market contain chemically synthesized surfactants in its composition. In many cases, these surfactants are the same as those used in regular cleanup activities. In order to get more natural and biocompatible products, it would be interesting to include natural surfactants instead of chemical surfactants in the preparation of these pharmaceutical and cosmetic products. These biosurfactants are also present in the formulation of greener nanoparticles, replacing the chemical surfactants currently used in the preparation thereof. Most biosurfactants have antimicrobial activity, which would improve the properties of certain nanoparticles, as well as many pharmaceutical and cosmetic products. The main disadvantage of biosurfactants industrial production is related to the high cost compared to chemically synthesized surfactant production. The solution proposed by the Chemical Engineering research group at the University of Vigo, is the development of eco-friendly simple extraction of biosurfactant from a corn wet-milling industry byproduct, such as corn wash liquors, better known as "corn steep liquor (CSL)", which could compete in terms of cost production with its chemical counterparts.

A New Application for Vitamin DMacrolid Induced Correction of Premature Stop Codons: A novel Treatment for Colorectal CancerIron oxide nanoparticles (IOP) for the treatment of acute myocardial infarction (AMI) and other inflammatory conditionsLaboratory of Glycoimmunology