The proposed system is characterized by the following aspects which make it unique:

1- The system is built from a number of PEM fuel cells, supplied by al least one hydrogen source. Each module include a monitoring and control subsystem, so it is possible to activate/deactivate module induividually.

2- Each module can supply a different power value.

3- The monitoring and control subsystem receives electrical signal from each modules like stack voltage, stack current and cell voltage.

4- The monitoring and control system has two levels: the first level aims to control each module (local control) and the second level is responsible for coordinate local controller.

5- The monitoring and control system is on-line accessible.

6- The control and monitoring system distributes homogeneously the operating hours between the modules when the power demand is lower than the maximum power.

7- Each module has a oxygenation/cooling subsystem which supplies oxygen to cathide and air for refrigerate the stack.

8- Each module has a hydrogen subsystem wich is the responsible for hydrogen delivery to stack at ambient pressure.

9- The hydrogen subsystem include a hydrogen purge line.

10- The Electric Power Generation System includes a simulator to reproduce the performance ogf the whole subsystem. 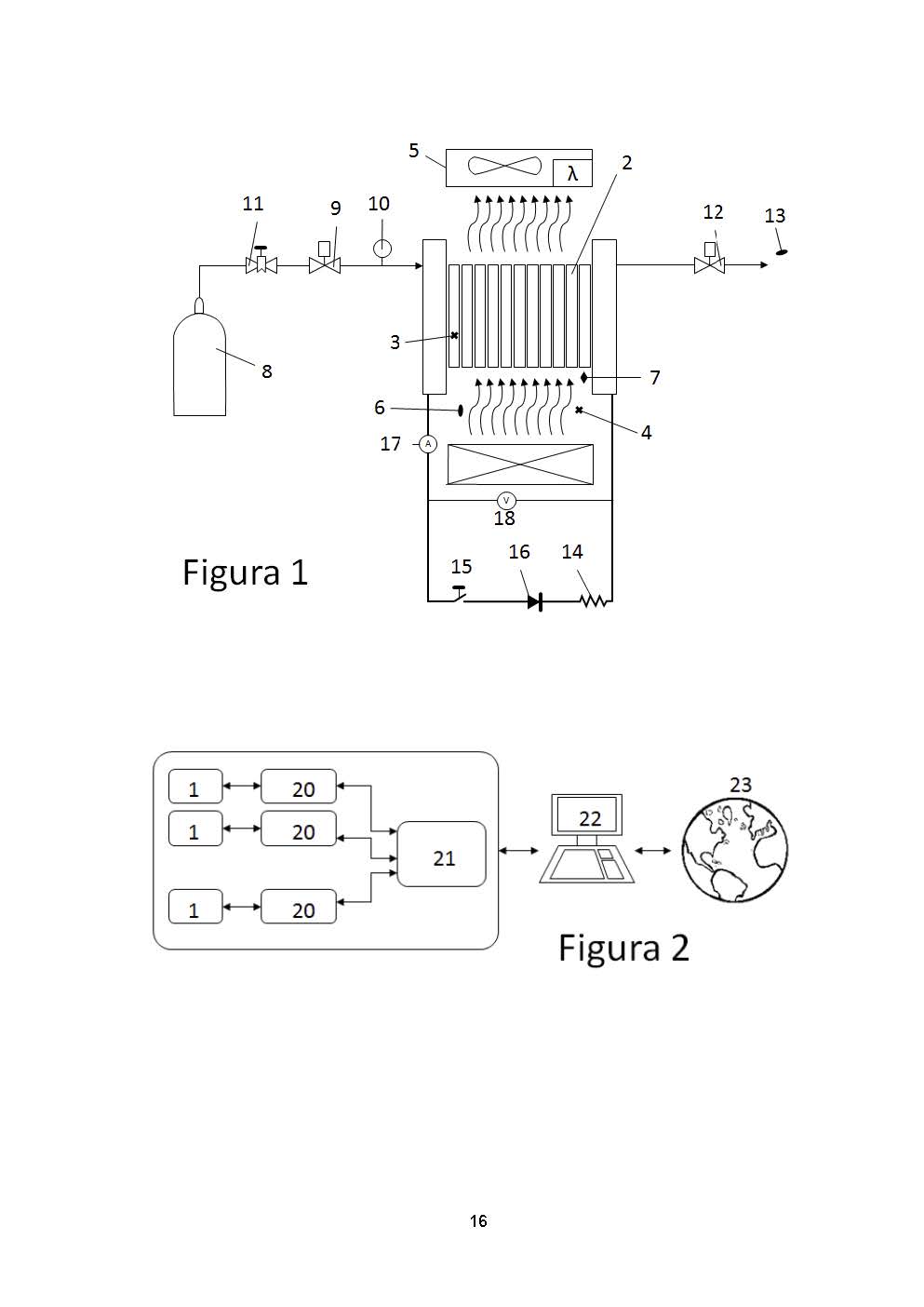 This invention proposes a regulated power generation system, modular and without harmfull emissions, whose implementation is based on fuel cell systems. These fuel cell systems are built from PEM stacks and their instrumentation, control and monitoring systems.

The most relevant technical specifications are listed below: 1- The system include a number of modules (the number of modules can vary according to user’s needs. The modules are based on PEM fuel cells. Fuel cells are characterized becaused they produce electricity from the hydrogen and oxygen combination with water as the the only sub-product. Then there is no harmfull emissions, and the system can supply electrical power along 24 hours/day during 365 days/year. 2- The system can supply electrical power in the range from 0 to “n”*”p”, where “n” is the number of modules and “p” the maximum power. In case each module supplies different power value, the power range varies from 0 to (p1+p2+...+pn). 3- With the aim to improve the life time of each PEM stack, a cell voltage monitoring system is included. 4- The system is characterized because PEM stacks are air cooled and they do not require high hydrogen inlet pressure. The first feature allow there is no liquid parts, so integration is more easy. The second adds security. Both qualities give simplicity and reduction in volume, weitgh and cost. 5- The system includes a control and monitoring system for each module, so it is possible activate/deactivate each module. Moreover there is a general controller which decide what module must to be activate or what module deactivate. 6- The monitoring and control system is on-line accessible.