Researchers at the University of Burgos have developed polymers that are capable of detecting the compounds released by certain decomposing foods.
Using this technology is possible to know quickly and safely if packaged food, specifically fish, is still suitable for consumption. These materials can be presented in the form of films, porous membranes and integrated into other fabrics, such as cotton fibres. 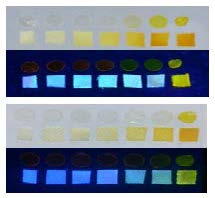 Until now, the expiration date (or best before date) is the only information available to the consumer to know the useful life of a food. The polymers developed by the University of Burgos make it possible to determine the presence of biogenic amines that a food releases during its putrefaction. By applying this technology, the presence of, for example, putrescine and cadaverine (two of the most common amines) can be determined quickly and efficiently. This technique is positioned as a viable alternative to the determination of these compounds by techniques that are more complex.

The main advantages of this material and its use in the determination of the chemical compounds of interest are:
- Simple and cheap. It does not require handling of reagents or pre-treatment.
- Specific. The detection of amines in the gas phase has no interferents.
- Response time. The analysis is practically immediate (colour change and fluorescence).
- Versatile. The polymer can be presented as a film, a membrane or covered by fibres, such as cotton.

The synthesized aromatic polyamides (figure 1), which contain structures derived from 1,8-naphthalimide anchored to the main chain, are obtained by polycondensation reaction of the initial monomers. These structures, when interacting with amines and biogenic amines, undergo a change in colour and/or fluorescence. Specific:
Colour change: B-ethylenediamine, cadaverine, trimethylamine, morpholine and putrescine.
Fluorescence change: β-ethylenediamine, cadaverine, morpholine and putrescine.
The final material can be obtained as a film or, by foaming, as a porous membrane. Additionally, these polymers can be integrated into other fabrics, such as cotton fibres.

The material developed can be applied in the food industry as an intelligent label to account for the freshness of food packaged with a controlled atmosphere, such as packaged fish.
A more general use would consist of using this material as a sensor against the presence of a wide variety of amines in the gas phase.

Market research, consumer studies and advice for the development of online and mobile commerce