The Land and Structural Engineering group (InTerEs) has developed an automated and reinforced machine for performing rock tilt tests of up to 100 kg. This invention allows accurate setting of the test speed, which significantly reduces unwanted vibrations. In addition, it reaches up to 80º of platform tilting and allows the test to be automatically stopped. The group is looking for companies interested in acquiring this technology for commercial exploitation. 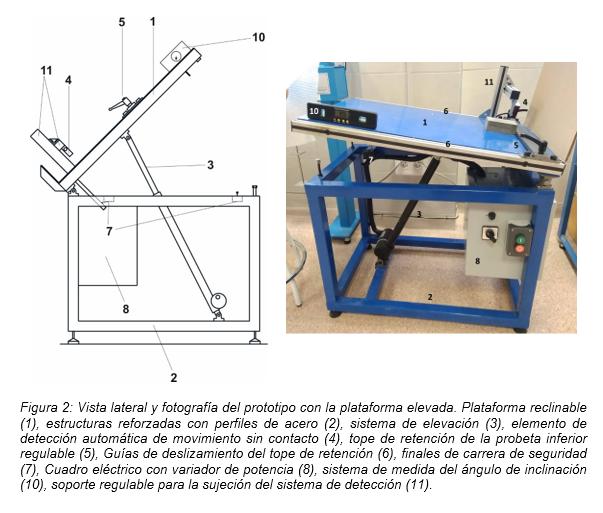 The tilt test is used in rock mechanics laboratories and rock engineering projects as a simple, sufficiently reliable and affordable technique for the determination of the basic friction angle of rocks or the friction angle of discontinuities.

In essence, it consists of placing a block of rock or other stone material on another supporting block or a test specimen on two other cylinders, and then tilting it until one fragment starts to slide over another (see Figure 1). At the moment when the displacement starts, the angle of the support plane with respect to the horizontal is measured, which is related to the basic friction angle of the rock or of the discontinuities depending on the type of sample used. This equipment can also be used for the development of physical scale models of slopes.

Up to now, the gradual tilting of the support plane has usually been carried out by manual means. In this equipment, there is no possibility to control the angular speed at which the platform is tilted, resulting in unwanted vibrations and human-induced speed variations, which decrease the efficiency of the test. In addition, the end of the test is manually controlled by the operator by pressing the stop button on the equipment or by stopping the manual rotation or thrust that generates the tilting of the platform. Therefore, the manual stop is not immediate, as the response time of a human to a stimulus is usually a few seconds, and this causes an error in the value of the angle obtained.

On the other hand, in long-travel tilt tests, a wedge or stop of different lengths is necessary to finish the test, which also has a disadvantage for the versatility of the test, since it forces the user to have different types of wedges.

Finally, it should be noted that the existing equipment is only used to test small, lightweight specimens, which means that their structures are not designed to support large loads or large specimens.

For all these reasons, there is a clear need for a system that allows the tilt test to be carried out in all its variants, that can be used for samples of any weight or size, and that allows the development and completion of the automated test to eliminate the error introduced by the human factor.

The present invention consists of an automated tilt test machine with a steel profile reinforced structure for testing specimens and blocks of rock and other geomaterials of large dimensions and mass. It features precise tilt speed regulation by means of a variable speed drive that controls the lifting system, such as a linear actuator, thus significantly reducing unwanted vibrations and accelerations during the test. In addition, it has a system that is fully adjustable to the geometry of the test for the detection of movement and automatic stop by means of movement sensors when the specimens start to move or when a certain level of deformation is exceeded. Finally, the system is equipped with an adjustable lower specimen clamping stop that can slide along the test table to adjust it to the needs of the test (see Figure 2).

Therefore, the versatility of the equipment allows it to be adapted to the test conditions required in the Suggested Methods of the International Society of Rock Mechanics (ISRM) or to any other configuration that may be required.

The invention has several innovative aspects that differentiate it from existing machines on the market:

The main advantages of this technology are the following:

A prototype has been successfully tested on blocks of different characteristics.

This technology is protected by a utility model application:

It is mainly aimed at the Civil, Geological and Mining Engineering sector, more specifically, companies that manufacture equipment for materials testing and control, as well as teaching and research.

The research group is looking for companies interested in acquiring this technology for commercial exploitation through utility model licensing agreements.