Ruthenium (II) photocatalysts of formula (M +) nXn- are described, in which Xn- is an anion and M + is a cationic complex of formula (Ia) comprising an 8-arylsulfonamidoquinoline ligand, as well as its method of obtaining it. The use of said ruthenium (II) photocatalysts in the synthesis of imines by photooxidation of amines in the presence of oxygen and by the use of visible light is also described. 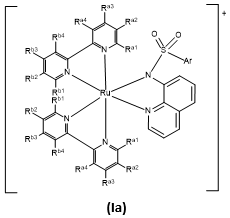 Furthermore, the ruthenium (II) complexes of the invention provide a high yield for the conversion of amines to imines (greater than 90%), with very good selectivity and without producing undesired by-products. This imine synthesis procedure is performed in the presence of O2 by irradiating with visible light at room temperature, between 20-30 oC.

•Conversions of benzylamine to imine with yields greater than 90% and without additives, at room temperature and with the use of oxygen or air as an oxidizing agent.

• The use of visible light allows synthesis to be carried out with substrates more sensitive to over-oxidation or the degradation of their products by photoactivation of bonds, avoiding the formation of unwanted secondary products.

• Present a photostability equal to or greater than that of the analogous complexes of the state of the art of ruthenium (II) of the formula [Ru (bipi) 3] 2+.

Design of new Ru(II) photosensitizers bearing 8-arylsulfonamidoquinolines and the successful evaluation of their photocatalytic properties in a new method the smooth and selective oxidation of primary and secondary benzylamines using O2 as the oxidant.

In this proposed method three key features must be highlighted: the photosensitizing ability of the Ru(II) complexes that promotes the production of O2; the electrophilic nature of O2 that facilitates its reaction with nucleophilic amines and the weak acidic character of the in situ generated H2O2 that assists in the catalytic activation of the primary aldimine.

GEO-MOBILITY: Application that helps people with disabilities or reduced mobility to control their environment