Antibacterial alternative to antibiotics, with high specificity against Escherichia coli

The "Molecular Microbiology" research group at the University of Alicante has modified several phage proteins (Poll-N and UK-C) that have high specificity against Escherichia coli (E. coli), but not against other Gram-negativ 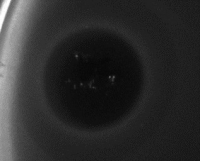 The "Molecular Microbiology" research group at the University of Alicante has modified several phage proteins (Poll-N and UK-C) that have high specificity against Escherichia coli (E. coli), but not against other Gram-negative (G-) bacteria.

For these reasons, their use as a specific antimicrobial against E. coli is potentially interesting, especially in the case of contaminated food, cosmetics or water. It would also be useful in the treatment of diseases (infections) caused by E. coli.

The presence of a histidine tail attached to the phage proteins not only facilitates their purification but also improves lysis efficiency without the need of cell permeabilization treatments.

Companies interested in the commercial exploitation of the technology through license agreements and/or technical cooperation are sought.

The "Molecular Microbiology" research group at the University of Alicante has developed several modified phage proteins (Poll-N and UK-C) with antibacterial activity highly specific against E. coli without the need for previous permeabilization treatments.

Polypeptides (proteins) are a sequence of amino acids that are joined together by peptide bonds.

Once cloned, expressed and purified, the resulting proteins (Poll-N and UK-C) carry a histidine tail at their N-terminal or C-terminal end, being therefore different from the original. This tail not only facilitates its purification, but also favors the endolysin contact to the cell surface, thus improving its lysis efficiency.

The developed polypeptides can be used both as antimicrobial agents to prevent contamination by E. coli and in the treatment of diseases (infections) produced by E. coli.

The main advantages of the synthesized peptides, Poll-N and UK-C, are the following:

The main innovative aspect of the modified phage proteins is that they do not require prior treatments of OM permeabilization. Furthermore, the addition of nucleotides at the ends facilitates their manipulation and subsequent cloning in the appropriate expression vector. Finally, another innovative aspect is the generation of anti-E. coli endolysins whose sequence is significantly different from others.

The technology is developed at laboratory scale.

The efficacies of purified Poll-N and UK-C endolysins have been tested by means of spot test experiments against different bacterial strains. Figure 1 (for Poll-N) and Figure 2 (for UK-C) show the appearance of growth inhibition zones produced by lysis. 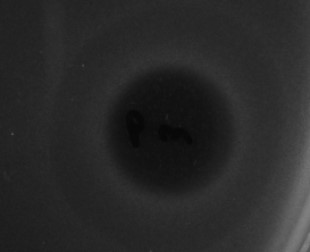 Figure 1. Result of a spot test experiment carried out with Poll-N at a concentration of 16 µg/mL on an E. coli strain. Bacterial growth is visualized as a gray layer on the plate. The dark central area, where the protein solution was loaded, indicates the inhibitory effect in growth produced by the endolysin. 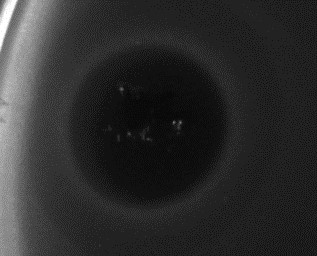 Figure 2. Result of a spot test experiment carried out with UK-C at a concentration of 16 µg/mL on an E. coli strain. Bacterial growth is visualized as a gray layer on the plate. The dark central area, where the protein solution was loaded, indicates the inhibitory effect in growth produced by the endolysin.

The present invention is framed in the general field of genetic engineering and, in particular, it refers to viral proteins that have been modified by means of the addition of a polycationic tail of amino acids at the N-terminal or C-terminal end, in such a way that they present antibacterial activity against E. coli without previous treatments of envelope permeabilization. Both proteins show a high specificity to E. coli.

Therefore, the developed polypeptides can be used both as antimicrobial agents against E. coli (particularly in food, cosmetics, water contaminated with E. coli, etc.), as well as in the treatment of diseases (infections) produced by E. coli.

This technology could be applied in biosanitary, veterinary, biotechnological, or agri-food companies interested in antimicrobial treatments alternative to antibiotics to control the growth of E. coli.

Companies interested in acquiring this technology for its commercial exploitation through technology transfer agreements (see below) are sought: