has developed a device based on nanogenerators for electrical cells stimulation without the need of
electrodes or bulky devices. The device is biocompatible and, among its multiple applications, is able to
actuate in medical prostheses as enhancer of cellular growth and proliferation, which permits an early
lesion recovery (such as a fracture or wound).
Industrial partners dedicated to the development of medical devices for cells stimulation, in particular,
focused onto therapeutic treatments of non-healing wounds, are being sought to collaborate through a
patent licence agreement.
An offer for Patent Licensing 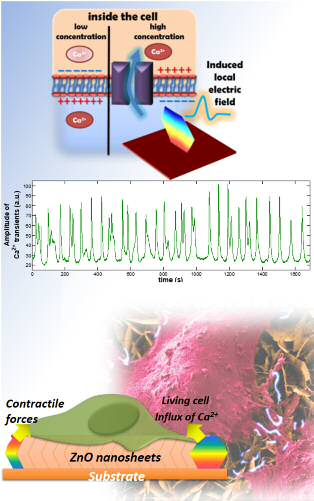 Fig1) Schema of the nanogeneration mechanism of a self-generating stimulation cells device.
Cellular growth, proliferation and differentiation mechanisms via electrical stimulation have been studied for decades. The acceleration and promotion of the cell growth is crucial for multiples biomedical applications like therapeutic treatment of lesion (fracture or non-healing wounds). Different approaches and techniques have been developed, however, less invasive and more effective healing technologies are being still demanded.
In this context, a self-generating voltage device for cellular electrical activation and stimulation inducing cell growth, mobility and/or differentiation respond to the former market´s demand.
The device consists of biocompatible nanogenerators based on piezoelectric material, which is able to modulate the electrical activity of living cells. It has been demonstrated that the depolarization or hyperpolarization of cell membranes induced by dynamic strain improves on cells growth. Due to its autonomy, it does not need electrodes or external stimulus, such as ultrasounds or magnetic fields, avoiding the associated drawbacks and side effects. The device has being already validated in bone prosthesis.

· The self-generating cells stimulator improves growth, differentiation and proliferation of bone cells, but also other types of cells, such as neural and muscle ones.
· The cell stimulation does not need any synergy storage mechanism or any external stimuli, if compared to other stimulation methods based on induction or mechanical coupling · Applicable as coating form onto medical bone prosthesis.
· As medical device is suited for long (more than 30 days) as well as short-term implants (neural and muscle cells).
· Local, uniform and tunable electrical cell stimulation, with spatial resolution in order of