CSIC has developed a chimeric protein that, when expressed in bacteria, changes its structure upon absorption of blue light, thus generating protein aggregates (amyloids) that inhibit bacterial growth Industrial partners from the pharmaceutical industry are being sought to collaborate through a patent licence agreement An offer for Patent Licensing

CSIC has developed a chimeric protein that, when expressed in bacteria, changes its structure upon
absorption of blue light, thus generating protein aggregates (amyloids) that inhibit bacterial growth 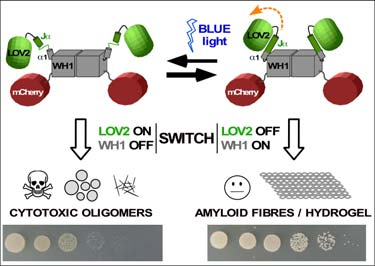 A new, sustainable and clean way to inhibit bacterial growth

Optogenetic device to control amyloid assembly and bacterial growth (‘optobiotic’). Blue light illumination of a photosensor LOV2 domain (green), fused to WH1 (grey) and to a fluorescent marker (red), promotes the formation of WH1 amyloid oligomers that inhibit bacterial growth (bottom: spot assay with E. coli) In this patent, the power of optogenetics to engineer proteins as light- responsive switches has been used to control the balance between solubility and amyloid aggregation for LOV2-WH1, a chimera between the plant blue light-responsive domain LOV2 and the bacterial prion-like protein RepA- WH1.
In the darkness and in vitro, LOV2-WH1 nucleates the irreversible assembly of amyloid fibres into a hydrogel. However, under blue light illumination LOV2-WH1 assembles as soluble oligomers.
When expressed in the bacterium Escherichia coli, LOV2-WH1 forms in the darkness large intracellular amyloid inclusions compatible with bacterial proliferation. Strikingly, under blue light LOV2-WH1 aggregates decrease in size while they become detrimental for bacterial growth.
LOV2-WH1 optogenetics governs the assembly of mutually exclusive inert amyloid fibres or cytotoxic oligomers, thus enabling the navigation of the conformational landscape of protein amyloidogenesis to generate a new kind of photo-activated anti-bacterial devices (optobiotics).

· A synthetic protein construction (LOV2-WH1) is activated as an anti-microbial by a physical, harmless stimulus: blue light · Blue light absorption by LOV2-WH1 stimulates the assembly of anti-bacterial protein particles whereas, in the darkness, these are inert · Mobilization of LOV2-WH1 through vectors/bacteriophages wouldenable its usage against a broad spectrum of bacterial pathogens · LOV2-WH1 is amenable to photo-therapy procedures aiming tocombat bacterial skin infections, or to de-contaminate pathogens fromsurfaces · In mixed bacterial populations assembled in an industrial bioprocess,optogenetic activation of LOV2-WH1 can be used to selectivelyeliminate a subpopulation, e.g. once achieved its intended task

Carbosilane dendrimers and their use as antivirals

The research group in "Dendrimers for Biomedical Applications" of the University of Alcalá presents these highly branched macromolecules synthesized from a polyfunctional nucleus, of carbosilane structure and functionalized in its periphery with anionic groups that give the macromolecule a negative net charge. In addition, the invention relates to the use of the dendrimers as an antimicrobial and the process for obtaining them. The group seeks to reach collaboration agreements, licensing or commercial agreements with technical assistance, with companies in the biotechnology, pharmaceutical and biomedicine sectors in general.

The research group of the University of Alcalá in «Dendrimers for biomedical applications» presents the following invention that refers to the formation of dendrons of carbosilane structure that have in their periphery preferably anionic or cationic groups and in the focal point fatty acids or derivatives of these. Its main field of application is in biomedicine, as non-viral transport agents, as drug transporters, to elaborate a drug, as antimicrobial, antiviral or antipyretic agents. In the environmental sector we also find its application as biocides for water treatment. The group seeks to reach license agreements, collaboration or commercial agreements with technical assistance with companies from the sector of Health, Pharma and Environment.

The Research Group in "Dendrimers for Biomedical Applications" of the University of Alcalá presents a new invention that refers to the formation of nanoconjugates with antitumor activity, mainly against advanced prostate cancer. Nanoconjugates are composed of dendritic systems (dendrimers and dendrons) and neuropeptides. The dendritic molecules are mainly of carbosilane structure and with ammonium functions in the periphery. And the peptides are preferably of the glucagon / secretin family (VIP, GHRH, PACAP…etc.) The research group seeks companies from the Biomedicine, Pharmaceutical and Health sector, to establish licensing agreements, cooperation agreements or commercial agreements with technical assistance. 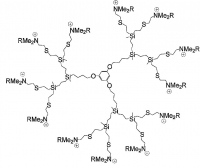