Microorganism and method to produce urolithins

Professor Francisco Tomas group at CEBAS-CSIC has isolated and characterized the first urolithins- producing microorganism from ellagic acid and ellagitannins present in the diet. A urolithin producing method based on the use of the mentioned microorganism has been developed and both, the microorganism and the method are part of a Spanish priority patent application assigned to CSIC. Biotech companies, functional food or nutraceutical companies are sought for license and/or development agreements. An offer for Patent Licensing 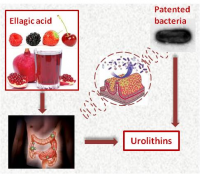 Professor Francisco Tomas group at CEBAS-CSIC has isolated and characterized the first urolithins-
producing microorganism from ellagic acid and ellagitannins present in the diet. A urolithin producing
method based on the use of the mentioned microorganism has been developed and both, the
microorganism and the method are part of a Spanish priority patent application assigned to CSIC. 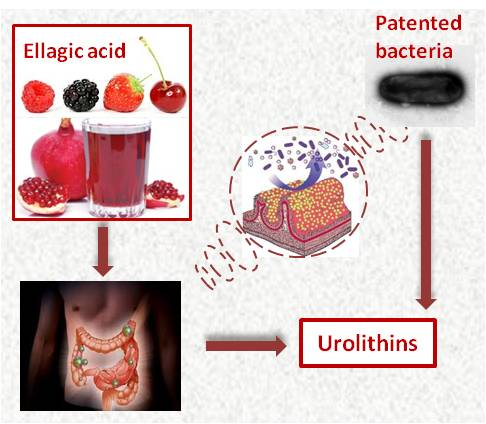 Urolithins production as in the intestine Urolithins are antioxidant compounds that could act as estrogenic modulators, have anti-inflammatory and anticancer activities, prebiotic effects and prevention of cardiovascular diseases.
The microbes present in the intestine through dietary ellagic acid and ellagitannins metabolism produce these compounds. The urolithins produced, once absorbed, join the blood current and could exert their protecting effect in the corresponding organ/tissue.
The invention provides a microorganism capable to produce urolithins from dietary ellagic acid and ellagitannins. Besides, a method for industrial production of urolithins to be used in food compositions, drinks, dietary complements, pharmaceutical compositions and/or functional foods enriched in urolithins produced in a similar form as in the intestine (bacterial metabolism from dietary polyphenols) has been developed.

A technology based firm, set up by researchers of Alcalá University, has developed a procedure to obtain active principles from Aloe leaves. With this procedure, a product with pharmacological, cosmetic and nutritional use is obtained. The resultant product could have therapeutic and/or food properties. Toxic compounds as phenols are removed. The researchers are interested in join venture and/or manufacture agreements.

This product consists of a natural extract wich combines olive oil phenols and other bioactive compounds from herbal species. The bioactive compounds of the natural extract have been characterized and quantified. Its use allows a novel therapeutic approach by means of the combination of complementary antioxidants from different origins that provides additional health benefits. Consumer acceptance has previously been assessed by conducting a panel test. Data from a randomized, controlled, crossover, clinical trial showed an improvement of vivo endothelial function and HDL subclass distribution, in humans. These effects were obtained with a low daily intake of the extract.

Gallic Acid is a naturally occurring phenolic compound that is widely distributed throughout the plant kingdom. Different studies have demonstrated the strong antioxidant, anti-inflammatory, anti-mutagenic and anticancer properties of GA, and daily intake may reduce the risk of diseases and bring health benefits. More recently, Gallic Acid has also been studied for its beneficial effects on cardiovascular diseases. It inhibits dyslipidemia, hepatosteatosis and oxidative stress in high-fat diet fed rats, protects the myocardium against isoproterenol-induced oxidative stress in rats, ameliorates the heart-function defects of myocardial dysfunction associated with streptozotocin-induced type-1 diabetic rats and exhibits anti-hyperglycemic and lipid-lowering properties in high-fat diet mice. Gallic Acid is commonly used as antioxidant by the food industry. However, until now, it is not known that the gallic acid could block the renin-angiotensin-aldosterone system (RAAS), which is the innovative aspect discover for the Nutrigenomic Group for the Gallic Acid. The inhibition of the RAAS by Gallic Acid is considered to be of special relevance because RAAS overactivity is currently associated with not only hypertension but also vascular inflammation, the development of atherosclerosis, left ventricular hypertrophy, nephrosclerosis and cardiovascular events. This discovery has a big importance because it opens a wide field of use for this compound in the food, nutraceutical or pharmaceutical industry. 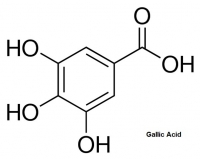 Laboratory for Trace Organic Analyses is an integral part of the Department of Chemical Engineering and Technology at Krakow University of Technology. The Laboratory is accredited from Polish Centre for Accreditation that signed EA Multilateral Agreement. PCA has become a signatory of EA MLA

Method based on a nutritional intervention to fight coccidiosis

We seek industrial partners with expertise in the sector of crop production to adopt a new technology useful to deliver optimized feed solution to fight coccidiosis. The type of partner sought is mainly for the regulatory codevelopment and the commercialization of our solution under a technology license agreement. The technology developed relates to a novel genetically engineered variety of maize accumulating extraordinary levels of carotenoids (β-carotene, lycopene, zeaxanthin and lutein). Poultry raised on this corn were healthy and exhibited substantially higher levels of resistance to coccidiosis, less foot pad dermatitis, reduced number of ulcers and less excretion of pathogen oocysts in feces. Carotenoids accumulate in several tissues (skin, dermis, muscles and fat), conferring high nutritional value and greater consumer acceptance.

Carbosilane dendrimers with terminal thiol groups on their surface. Their preparation and their uses.Production method of a new recombinant collagenase for collagens digestionProcess for converting waste, effluents and organic by-products in recyclable materialsNanoencapsulated ginger extract for food applicationsFormulations for ready-to-eat Portuguese custard tart after microwave oven re-heating