CSIC has developed a material based on a mixture of metal oxides. This new material is capable of releasing oxygen gas during its reduction through an endothermic process and regenerating in air at high temperature (800-1000 ºC) releasing energy. The material behaves in a stable manner in successive reduction-oxidation cycles and has improved properties with respect to other similar materials available for processes in this type of chemical loops. Companies interested in patent licensing are sought for the development and use of materials capable of releasing oxygen gas. An offer for Patent Licensing

CSIC has developed a material based on a mixture of metal oxides. This new material is capable of
releasing oxygen gas during its reduction through an endothermic process and regenerating in air at
high temperature (800-1000 ºC) releasing energy. The material behaves in a stable manner in
successive reduction-oxidation cycles and has improved properties with respect to other similar
materials available for processes in this type of chemical loops.
Companies interested in patent licensing are sought for the development and use of materials capable
of releasing oxygen gas.
An offer for Patent Licensing

Mn2O3 OXIDACIÓN Mn 3O4 N2O2 CO2(CLOU) O2(CLAS/Alm.) REDUCCIÓN AIRE COMBUSTIBLE (CLOU) GAS PORTADOR (CLAS/ ALM .) Q Q O2 MxOy MxOy-1 Schematic of the process of reduction-oxidation of the new materials based on manganese oxides The new material is based on mixtures of metal oxid es with a majority component of manganese oxide (> 80% by weight). It can be prepared from an aqueous suspension containing the corresponding mixture of oxides, using available technologies, such as fluidized bed granulation and subsequent calcination. This new material presents a remarkable improvement with respect to other similar materials used in processes based on reduction-oxidation cycles, such as the po ssibility of regenerating in air at high temperature (800-1000ºC) over succes sive cycles.
This novelty makes it especially attractive for pro cesses involving redox reactions at high temperature (800-1000 ºC). One pr ocess is the so-called combustion technology by chemical loop with decoupl ing of oxygen (CLOU), which allows the combustion of different fu els with inherent capture of the CO 2 generated in the combustion. Another process is th e separation of air by chemical loop (CLAS). It is al so possible to use this type of material in thermochemical energy storage proces ses of renewable origin.

· Regeneration capacity in air in successive cycles, without losing the ability to release oxygen gas.
· Range of action at temperatures between 800-1000 ºC .
· Avoid the generation of harmful gases such as CO 2.
· Applicable to processes that require the production of pure or nitrogen-free · O 2 · CLOU and CLAS) and in the thermochemical storage of renewable energy · In the CLOU process, t he efficiency of the combustion process increases.

The main innovation aspects in ViTAM are the following: - Simple and usable user interfaces. User interfaces are asymmetrical, differing from the patient and the professional. While the patient’s interface is extremely simplified, the professional’s side keeps a slightly higher complexity to keep control of the videoconferencing. This approach facilitates at most the use of technology by non-experts. - Specially designed for medical and social consultations. It implements two innovative operation modes not available in the market: the online consultation with waiting room and the videoconferencing call centre (coming soon). - Multiplatform and Multidevice. It is multiplatform (Windows, Mac, Android, iOS) and multidevice (PC, laptop, tablet, smartphone). - Easy integration. It can be easily integrated in or with other applications, as well as connect with external services (e.g. electronic health record, calendar). - Customisation. It can be customised not only in terms of graphical user interface but also in the workflow so as to implement new personalised videoconferencing scenarios. - Single and multiple videoconferencing. It offers 1 to 1 videoconferencing and multivideoconferencing in a single and unified interface. - Privacy. It ensures privacy protection by providing communications and data protection and enables its deployment on certified medical data management servers. - Sensors. It can be implemented as a background application running on the device, which can receive incoming connection requests, which can be useful when linked to sensors data alarms (e.g. blood pressure).

Device for detecting and monitoring lactate in sweat

Electronic device capable of detecting lactic acid in sweat, in real time, through screen-printed electrodes. The device includes an enzymatic biosensor capable of measuring the specific activity of the enzyme lactate oxidase on lactic acid, substance generated during physical exercise and partly excreted through sweat.

Financial institutions are actively required to track clients engaged in illegal/suspicious activities in order to understand their overall risk exposure. Such activities are currently performed manually. Moreover, there is a lack of suitable product(s)/technique(s) in the market for real time, adverse media scanning. Additionally, the currently used products/techniques are associated with many possible limitations such as limited name matching parameters, imprecise transaction filtering rules, presence of false positives, significant human interventions, and absence of appropriate platforms for information sharing. The invention discloses a novel system/method to facilitate detection and reporting of suspicious/illegal activities over the internet.

Possibility of identifying nautical headlights at the distance that reaches the light if the headlights.

An instrument is proposed for the automatic identification of nautical lights in river or maritime navigation, also applicable on mainland. The invention must address a specific problem consisting of optimizing the adjustment of the optical system for the different incoming light intensities. 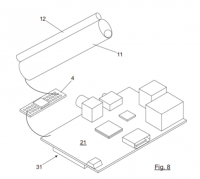 The converter has an input for connecting a monopolar DC source and a bipolar DC output, with the same voltage but with opposite polarities. It is useful for the connection of a distributed generation system to a bipolar DC grid. For these applications, the proposed topology is a solution with sufficient guarantees of reliability, quality and performance. The converter circuit is very simple, it includes three inductors, four capacitors, two diodes and a power switch as a switching device.