Procedure for measuring the speed of motor vehicles in the short section, with minimum error geometry, using 2 cameras and artificial vision algorithms.

The research group in Intelligent Vehicles and Traffic Technologies of the Automation Department of the University of Alcalá has developed a procedure for the punctual measurement of the speed of motor vehicles, through the

The research group in Intelligent Vehicles and Traffic Technologies of the Automation Department of the University of Alcalá has developed a procedure for the punctual measurement of the speed of motor vehicles, through the use of at least two cameras, pointing to two different regions of the track, calculating the relative distances of the vehicle from the cameras by detecting the license plate and its internal elements, storing timestamps, calculating the speed for all possible combinations of distances between cameras that are at the optimum distance that generates minimum error in the calculation of the speed and calculating the average speed of all the speed measurements obtained for optimal distances of minimum error.
The group seeks for licensing agreements, technical cooperation agreements, manufacturing agreements and commercial agreements with technical assistance with companies that perform maintenance and commercialization of precision kinemometers and companies that produce intelligent systems of transport. 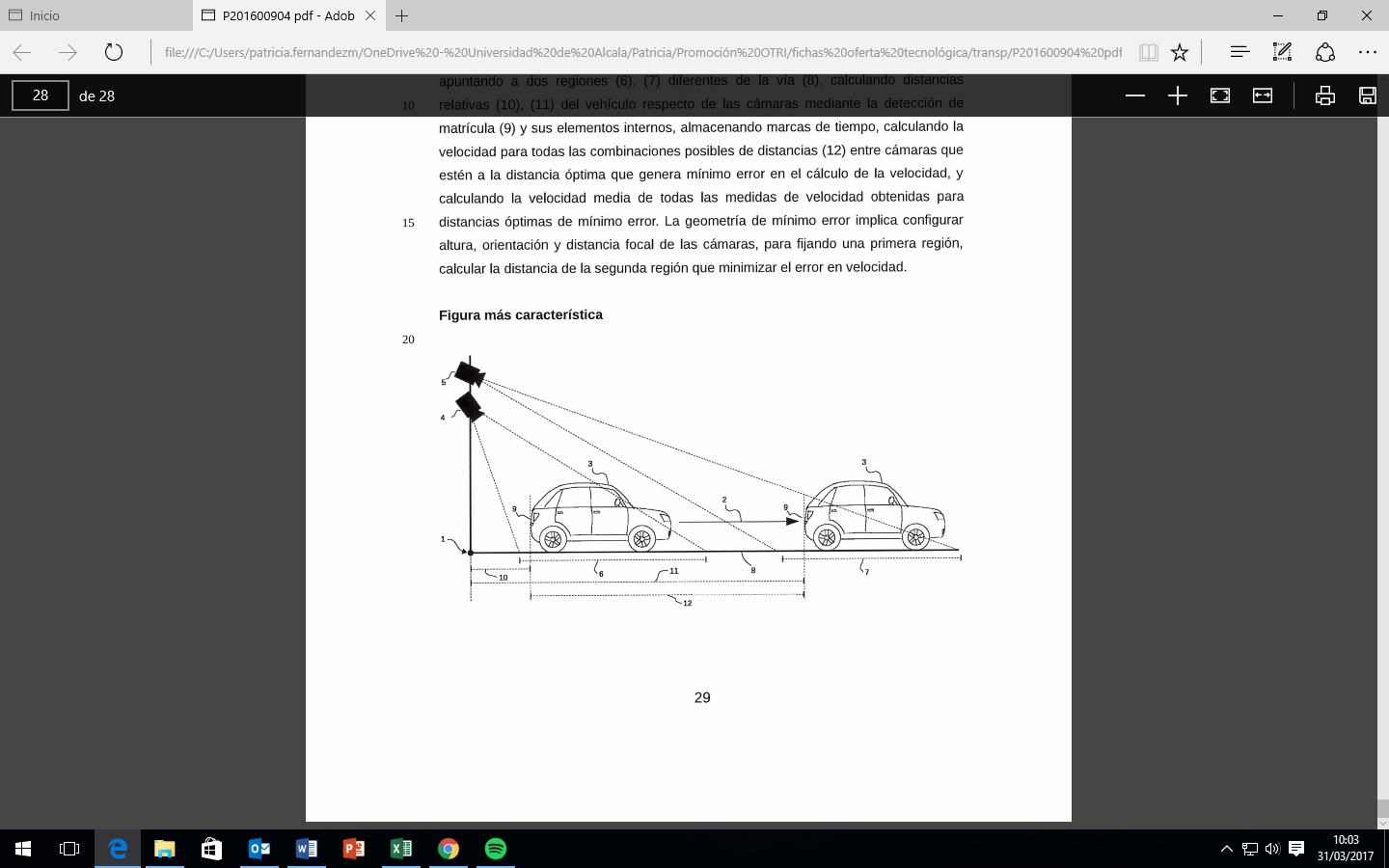 The invention relates to a method for the punctual measurement, that is, from a fixed point of the speed of the motor vehicles transiting the lanes of a road, through the use of at least two cameras, located in the same point either on a post or on a portico, pointing each of them to two different regions of the same lane.

The distance ranges between both regions must meet a specific criterion of minimum speed error. To do this, the height, orientation and focal length of the cameras must be configured in a specific way, being appropriate to the geometric restriction that guarantees minimum errors in the calculation of the speed.

In order to define a minimum error geometry, we need to obtain the optimum distance of the section that provides the minimum error in the estimation of the speed. For this, it is necessary to study the errors of distance estimation. For the specific case of cameras, it is known that the error grows square with distance. In this case we start from the calculation of the relative distance using for this known dimensions of the license plate, for example, its width. In this way we obtain a series of equations and curves that represent the minimum error geometry for different velocity values.

To maintain the accuracy of the system it is important that the focal length of the cameras for these systems be as high as possible. Therefore, this invention is based on the use of at least two cameras pointing to two different regions of the path with the greatest number of optimal pairs of possible distances between both regions, that is, distances between both regions that are optimal for minimization of the error in speed estimation. In this way, each camera can have a focal length as high as possible, minimizing the error in the calculation of distance and speed.

Under low lighting conditions, one or more artificial lighting systems that can be of visible and / or infrared spectrum will be activated to improve the contrast of the images. Both the cameras and the artificial lighting are synchronized thanks to an electronic synchronization card. Both the capture and the processing of the images and the storage of these and the results obtained are tasks carried out in the processor. Each image will have a high accuracy time stamp thanks to the use of GPS systems with GPSD process.

The invention has its field of application in the industry of intelligent systems of transport, and more specifically in the companies in charge of the commercialization and maintenance of precision kinemometers for the detection of speed of motor vehicles in different types of roads.

The invention proposes a novel method for the punctual measurement of the speed of motor vehicles by using at least two high-resolution cameras each pointing to two different regions of the same lane.

By using that cameras to detect the known dimensions of the license plate, the measurement error is reduced to a minimum. Artificial lighting systems are used to improve the contrast of images and maintain their effectiveness in low light conditions.

All information is managed in a processor, which also allows the storage of timestamps.

This new procedure establishes a specific criterion for minimum error of speed measurement, which is not found in other systems, by using at least two cameras located in the same point, either on a pole or on a portico, pointing each one of them to two different regions of the same lane. In this way the problems resulting from the errors in the punctual measurement of the speed are considerably reduced.

High commercial potential at national and international level with a much lower cost than the relative cost associated with radar or laser-based point-based kinemometers.