Development and method of construction of a new electrochemical sensor of Magnesium (Mg2 +), without the need to add organic salts, additives or organic solvents to the sample 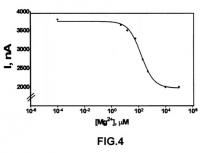 The research group in Bioelectrochemistry and Biosensors of the University of Alcalá in collaboration with the Textile Industry Research Association (AITEX) has developed an electrochemical sensor of magnesium (Mg2 +) and a construction method based on the formation of a polymeric three-dimensional network that allows the entrapment / immobilization of a selective indicator for Mg2 +, eriochrome black T, by the use of a crosslinking agent and a polymer. The combination of these three reagents allows the construction of the sensor on any conductive surface, avoiding the electro polymerization of the indicator.
The resulting sensor allows to measure MG2 + in any type of samples, without the need to add organic salts, additives or organic solvents. The quantification of Mg2 + is done directly by incubating the sensor in the sample containing the analyte, resulting in a modification of the amperometric signal proportional to its concentration.
This method has many applications especially in health and biomedical sector since Mg2 + participates in such important activities as neuronal, neuromuscular transmission, or regulation of blood pressure and plays a key role in various pathologies such as vascular and migraines headache.
The group is looking for companies in the agro-food, bio-sanitary and environmental sectors, with the aim of reaching technical collaboration agreements, commercial agreements or patent licenses. 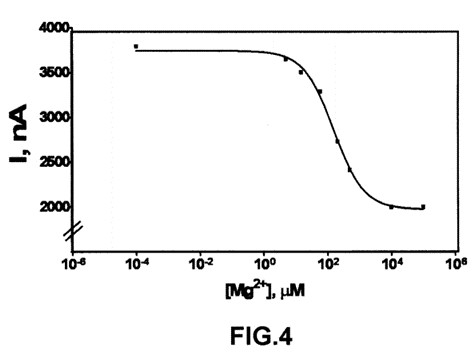 This invention proposes the design and method for the construction of a "reagentless" chemical sensor for the electrochemical detection of Mg2 +. The sensor described is based on the entrapment / immobilization of the indicator in a three-dimensional polymeric network that provides greater chemical stability.

One of the key features of this network is its permeability and flexibility that simulates the properties of the homogeneous state (indicator in solution) allowing it to form complexes with the analyte or target compound, but which in turn retains and stabilizes it, without producing polymerization. This union results in a change of potential, intensity and / or conductimetric that is proportional to the concentration of analyte in the sample.

The sensor described does not need the addition of any reagent for the quantitative and selective detection of Mg2 + in any matrix.

More specifically, the invention relates to an electrochemical sensor for the detection of Mg2 + and the method for its construction. This sensor is composed of a polymer, the Eriochrome Black indicator T and a crosslinking agent on an electrode support which can be Au, Pt, vitrified carbon, graphite, graphene or any other conductive support such as conductive textile fiber. This configuration confers selectivity and stability to the sensor. The sample is measured directly after immersion of the sensor without the need to add a reagent.

It is also remarkable that the proposed analytical device or sensor interface object of the invention allows to use an electrochemical transduction with a storage stability in both dry and hydrated conditions of at least 50 days.

The detection of Mg2 + in biological fluids is fundamental since it regulates numerous activities such as, for example, neuronal, neuromuscular transmission, or blood pressure and plays a key role in various pathologies such as vascular diseases and migraines. In case of physical or mental stress, there is a decrease in magnesium. In addition to magnesium it is used to obtain chemical and refractory products, such as alloy, reducing agent or in cathodic protection.

This method has many applications especially in health and biomedical sector since Mg2 + participates in such important activities as neuronal, neuromuscular transmission, or regulation of blood pressure and plays a key role in various pathologies such as vascular and migraines headache.

The group is looking for companies in the agro-food, bio-sanitary and environmental sectors, with the aim of reaching technical collaboration agreements, commercial agreements or patent licenses.

In comparison with the ion selective electrodes, the device presented, as well as the method for its construction, is simpler since it is not necessary to add organic salts, additives or organic solvents, only three components are needed, a polymer, the indicator (Black eriochrome T) and a crosslinking agent. Additionally, this three-dimensional polymeric network or interface provides a suitable environment that stabilizes the indicator in such a way that the sensor possesses a high stability, both operative and storage.

Nothing similar has been found in patent databases or in the scientific literature consulted.

The patented analytical device is simpler than all the existing techniques in the market for the detection of Mg2 +, presenting the advantage of being more economical, portable, selective and easy to use.

It has a high commercial potential at an international level, focused mainly on the US and European markets with difficulty and cost of implementation very low.