The research group “Communications, Multirate Systems, and Biomedical Engineering” of the University of Alcala presents a novel synchronization procedure for multicarrier or single carrier systems for narrowband and broadband communications. This procedure allows a precise estimation of the symbol timing offset (STO), and a coarse estimation of carrier frequency offset (CFO). The procedure is based on the inclusion of symmetric extensions in the transmitted symbols for the synchronization, which makes it useful not only for communications systems based on the discrete Fourier transform, but also for transceivers based on the discrete cosine transform (DCT).

Among its main applications are communications through single-mode optical fiber, powerline communications, wireless and wireline systems, and in general, all the techniques that use multicarrier and single carrier modulations. 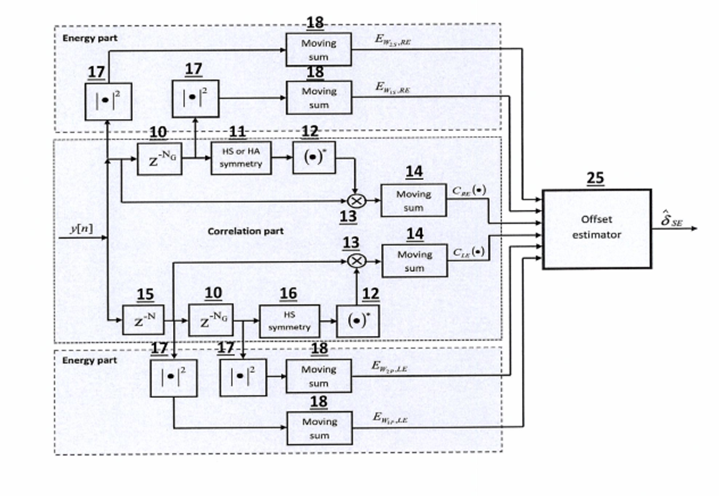 The invention proposes novel schemes for the synchronization of transceivers in single-carrier and multi-carrier communication systems with redundant data, which have grown rapidly, especially over the last two decades. Future generations of communication systems will demand large bandwidths and high data transmission rates to provide the user with improved data services.

The medium access techniques dominant in these and other technologies are based on single carrier modulation (SC) and multi-carrier modulation (MCM). Examples of the latter are OFDM (Orthogonal Frequency Division Multiplexing) for wireless systems, and DMT (Discrete Multitone Modulation) for xDSL (Digital Subscriber Line) technologies. The forecast is to increase its use and implementation in future generations of communication systems.

The DMT and OFDM systems are efficiently implemented using the discrete Fourier transform (DFT). However, these technologies present a number of drawbacks, such as the sensitivity to temporal and carrier frequency offsets. The estimation of the symbol start time and the carrier frequency offset are of crucial importance in recovering the transmitted signal. For this reason, numerous methods have been proposed for DFT-based systems.

As an alternative to DFT based systems, several authors have proposed the use of different transforms, such as the discrete cosine transform (DCT). However, although synchronization is crucial and critical to the proper functioning of the system, the problem of finding a robust technique for DCT-based transceivers was unresolved.

In this sense, the group have developed some algorithms to efficiently estimate the STO and the CFO for DCT-based systems. However, the proposed methods may also be used in DFT-based transceivers, whereas redundant samples are inserted into symbols which exhibit symmetry and antisymmetry.

The insertion of the redundant samples introduces similarities or correlation in the transmitted symbol, which is used to estimate the temporal and frequency offsets.

The timing of the maximum correlation is used to detect the start of the symbol, while the correlation phase provides an estimate of the frequency.

The invention presents some novelties and advantages such as the absence of similar techniques for DCT-based transceivers, and the low computational cost to carry out the processing of signals, which brings with it several advantages, such as a lower energy consumption.