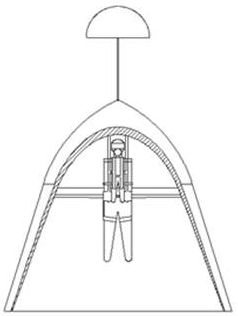 Currently existing devices for emergency evacuation in buildings mainly include controlled descent devices, escape chutes and different parachute systems, the latter based on the resistance that its components offer to air.

The innovative aspect of this life-saving device is in its design that uses an inflatable system based primarily on aerodynamic drag forces. The inflation gas is nitrogen which density is somewhat lower than air, so that the flotation effect is very small.Main advantages of its use

- Can be used by adults. If there are children or elderly disabled, the device can be used in tandem accompanied by another person with normal faculties.

- It allows a controlled descent.

- It does not require that the user have prior knowledge as in the case of parachute, or make any control on the device.

- Its use does not require excessive high buildings.

The device takes the form of hollow bell and the shape is achieved by the swelling inside with nitrogen from the ignition of pyrotechnic cartridges sodium azide, located in the backpack.

Due to the fact that the space is not empty, but is filled with air, it will present a resistance to be crossed, which causes the falling speed reaches a value of dynamic equilibrium between forces of Earth's gravity, aerodynamics resistence forces and buoyancy forces by density difference with air.

Device that can be part of the security system and evacuation of buildings in case of emergency. It could also be used for recreational and sporting purposes.

Method for the optimization of large structural elements.