The field of the invention is related to compounds containing a triazole-dipyrromethene core which facilitate the anion transport through lipid membranes. These molecules are capable of mimicking the function of transmembrane proteins and thus replacing their function at cellular level. These compounds are particular useful for the treatment of diseases related to malfunction of natural anion transport mechanisms such as Cystic Fibrosis. 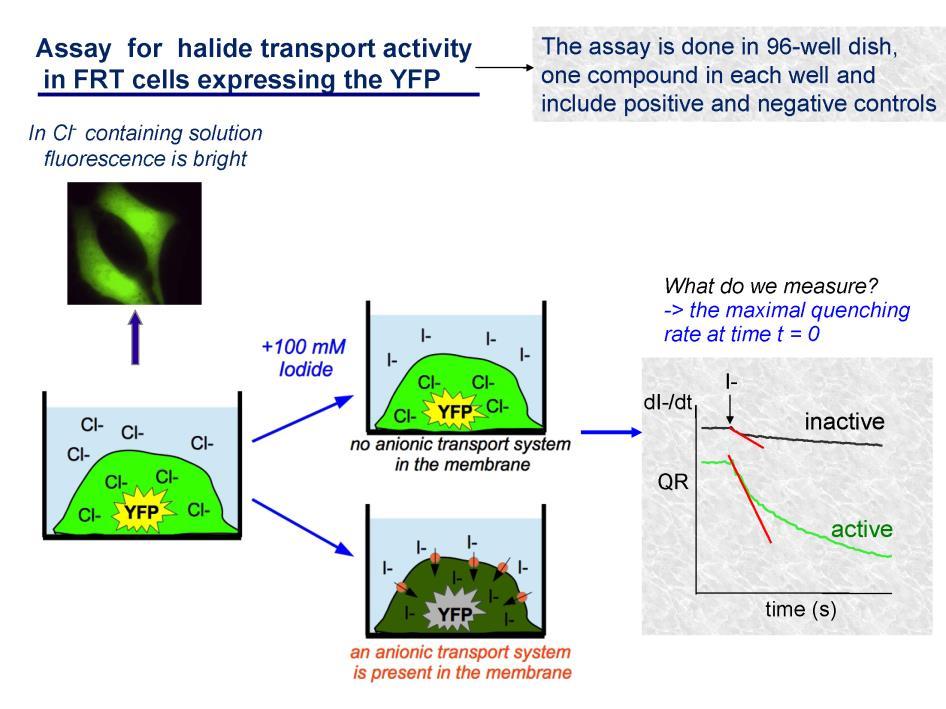 There are very limited studies in the literature concerning the possibility of using synthetic transport systems to replace the missing transmembrane anion transport activity characteristic of Cystic Fibrosis. Most of them referred to the use of peptides which degradability limited the potential scope of this approach.

The current invention provides a significant contribution related to the characterization, design and synthesis of small molecules with anion transport capacity, and their biological activity.

The current standard therapies for Cystic Fibrosis are based mainly in palliative treatments of the illness symptoms. Recently it has been approved for use a drug that acts on the root of this problem, enhancing the transport of ions through natural channels, but only applicable to patients suffering from certain genetic mutations of the CFTR transmembrane protein.

These small molecules facilitate the transmembrane transport of anions independently of the genetic mutation, therefore they are therapy applicable to all Cystic Fibrosis patients, regardless of the type of mutation they harbor.

Compounds bearing triazole-dipyrromethane moieties are capable of facilitating transport of anions such as chloride and of bicarbonate in phospholipid vesicles models and cells.

Use of the compound for preparing a medicament for the treatment and / or prophylaxis of conditions arising from abnormalities in the anion transport at the cellular level such as Cystic Fibrosis.

Polymeric membranes with antiseptic capacity for food and textile aplicattion

Evaluation of mechanical and fracture properties by miniature punching test