CSIC, in collaboration with the University of Seville, has developed the synthesis of gold catalysts highly efficient in the Water Gas Shift Reaction (WGS). The catalysts, based on gold supported on CuO/ZnO/Al2O3 mixed oxides with hydrotalcite structure, are able to work without any pre-treatment and are robust against changes in the reaction operation conditions, that make them very useful for production and/or H2 purification processes for fuel processors coupled to fuel cells. An offer for Patent Licensing

CSIC, in collaboration with the University of Seville, has developed the synthesis of gold catalysts highly efficient
in the Water Gas Shift Reaction (WGS). The catalysts, based on gold supported on CuO/ZnO/Al2O3 mixed
oxides with hydrotalcite structure, are able to work without any pre-treatment and are robust against changes
in the reaction operation conditions, that make them very useful for production and/or H2 purification
processes for fuel processors coupled to fuel cells.
An offer for Patent Licensing 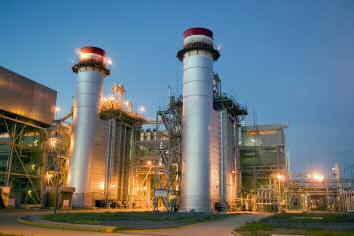 Maximum efficiency of conversion of CO in H2 The Water Gas Shift reaction, WGS, is a reversible and exothermic process which requires a continuing search for catalytic systems operating at low temperatures which enable increase the amount of hydrogen by decreasing the CO concentration. Another matter to be considered is that the WGS reactor is usually, by far, the biggest of the integrated process since the reaction is favored at low space velocities. It is because of, to facilitate its implementation in mobile applications, reducing the reactor volume is a key factor. In this regard, the development of catalysts enable of carrying out the reaction at high space velocities is one of the greatest current challenges. The nowadays catalysts for the WGS reaction at low temperature are based on Cu-Zn mixed oxides. However, they have important drawbacks as their pyrophoricity, pre-treatment activation and, in many cases, deactivation by sintering of the metal particles. Alternatively it has been proposed the use of catalysts based on noble metals (primarily Au and Pt). However, the highest effectiveness of these catalysts is only achieved with a high load of metal and it makes that, together with its high price, the use of these catalytic systems is limited. Both systems, based on mixed oxides and supported gold, has been intensively studied by separately however there is no reference regarding the use of a combined system.

The use of the gold catalysts supported on mixed oxides, represents a significant improvement for both the production and purification of hydrogen through the water gas shift reaction With all these precedents, gold catalysts supported on CuO/ZnO/Al2O3 mixed oxides, as alternative regarding the requirements needed for their use in portable devices of energy production, have been developed.

Granted Patent
-
 The synthesis and application of gold catalysts supported on CuO/ZnO/Al2O3 mixed oxides are proposed for their use in the WGS reaction. Patent granted in Spain and filed in Europe and US.  The catalyst synthesis, using a defined hydrotalcite-t

Granted Patent
-
 The synthesis and application of gold catalysts supported on CuO/ZnO/Al2O3 mixed oxides are proposed for their use in the WGS reaction. Patent granted in Spain and filed in Europe and US.  The catalyst synthesis, using a defined hydrotalcite-t

We have developed an improved fast and sequential protocol that permits the determination of low concentrations of nitrite and nitrate in aquatic samples using small volumes. It is ideal to analyse large sets of samples with different characteristics, since it is enough a small amount of water the volume and cost of reagents and consumables are reduced.

The invention solves the problems of inefficiency which usually shows the conventional passive treatment systems. The reactive fills developed for the removal of inorganic contaminants historically have focused on removing low concentrations of these (typical features of coal mining), however when these fillers are faced to high concentrations of metals (sulfur mining, uranium, industrial water waste…) quickly clogging and loss of reactivity occurs. The present invention allows the removal of metals without clogging and/or loss of reactivity. This is achieved by the use of a coarse inert material with high surface mixed with a fine-grained reactive material, so that the surface of the inert material is breaded with reactive material. Coarse fragments of inert material act as a frame, providing large pores that reduces clogging by precipitates. The small particle size of the reactive material provides a large surface area that increases its reactivity.

Many industries, such as those belonging to the textile, wine, and paper industry, consume huge volumes of water and, as a result, generate a large amount of contaminated water containing persistent colour pollutant compounds. These compounds represent an environmental and health threat due to their well-known associated problems, such as carcinogenicity, toxicity and mutagenicity. Furthermore, they entail a great environmental impact when discharged in aquatic environments, perceptible at very low concentrations, creating an undesirable visual impact, which, in many cases, does not meet the degree of conformity under the current directives on the wastewater treatment for industrial effluents (Directive 91/271 / EEC). The solution proposed by the research group Chemical Engineering at the University of Vigo, is the use as adsorbent of peat, or a similar lignocellulosic material, immobilized in calcium alginate beads. This process is efficient, cheap and environmentally friendly, unlike other processes and technologies. In fact, the utilization of peat instead of activated carbon as industrial adsorbent has the advantage that peat requires no activation, unlike activated carbon, reducing operating costs. In addition, the low cost of the adsorbent would be translated into significant economic benefits. Moreover, depending on the contaminant removed from the waste effluent, the exhausted adsorbent may be used as soil fertilizer at its end of life.

The Applied Electrochemistry and Electrocatalysis Research Group at the University of Alicante has developed an Stand-alone system for the desalination and disinfection of water by Electrodialysis (ED) and the necessary water pre- and post-conditioning steps. The developed system is sustainable and environmentally-friendly being directly powered by a photovoltaic solar plant without using battery racks. This new system substantially decreases both the investment and maintenance costs by eliminating the batteries. Also, it can be adjusted to be used in water from very different sources like seawater, brackish water wells, wastewater treatment plants, industrial processes water, etc. being of particular interest for remote areas isolated from the electric grid. The Research Group has a demonstration Pilot Plant with the capacity to produce up to 1m3 of drinking water per day. The Group is looking for companies interested in the commercial exploitation of this technology through licensing agreements and/or technical cooperation. 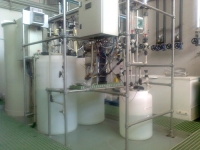 Process for converting waste, effluents and organic by-products in recyclable materialsBiopolymer based micro- and nanoparticlesLaboratory device to measure gas diffusion coefficients at real conditions.Treatment of water from bentonite slurryPROCESS FOR OBTAINING AN ADSORBENT FROM A WASTE MATERIAL AND USE OF THE ADSORBENT