The Photochemistry and Semiconductor Electrochemistry (GFES) research group of the University of Alicante has developed an ultrasonically-enhanced capillary reactor which achieves homogeneous, efficient and temperature-contro

The Photochemistry and Semiconductor Electrochemistry (GFES) research group of the University of Alicante has developed an ultrasonically-enhanced capillary reactor which achieves homogeneous, efficient and temperature-controlled multiphase flow. The reactor features a capillary tube in a helicoidal probe that homogenizes the acoustic field generated without the appearance of longitudinal nodes and antinodes. Continuous and/or oscillatory reactions including crystallization phenomena are enabled, allowing the handling of solids and/or the improvement of heterogeneous mixtures in capillary tubes of variable diameter and length with optimum temperature control. Therefore, this reactor provides an advantage in flow chemistry and process intensification which is common in the pharmaceutical industry, fine chemistry, and in sonochemistry.

The invention is protected by a patent application. The research group has a prototype on a laboratory scale. Companies interested in the commercial exploitation of this technology are sought through patent licensing agreements or technical cooperation agreements (R&D Projects). 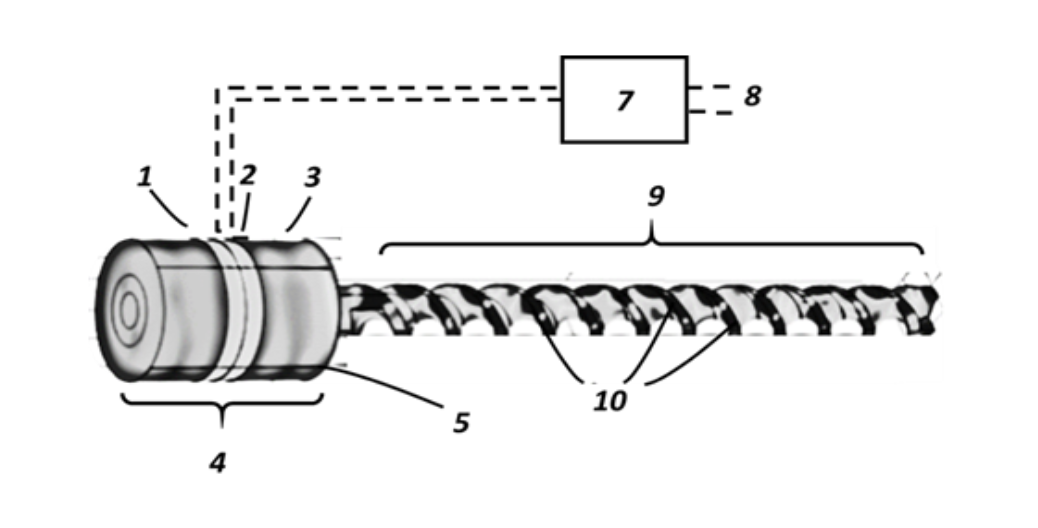 In flow chemistry the miniaturization of conventional chemical devices provides a better control over the reaction and greater efficiency, allowing continuous manufacturing instead of batch. However, the presence of solids limits the life span of these miniaturized reaction systems also called capillary, mili- or microreactors. The formation of particle aggregates can cause obstruction of the capillary reactor, commonly known as clogging, both on a laboratory scale and in industrial synthesis, limiting the implementation of these systems.

Acoustic energy has been classically applied to generate cavitation that agitates the particles flowing within capillary tubes via ultrasonic baths. Conventional ultrasonic devices present a number of problems. Ultrasonic probes shows periodic nodes and antinodes at a set distance (wavelength), which means that the system does not vibrate homogeneously at all points. Likewise, commercial ultrasonic baths used in capillary reactors will always show significantly uneven acoustic pressure fields in the liquid medium. In addition, its efficiency and scalability is limited by the loss of acoustic energy due to impedance differences between the transmitting fluid and the capillary material, cavitation phenomena in undesired areas and the risk of undetected leaks. Finally, the use of several transducers along the area of interest or indirect transmission through a liquid would also not be suitable due to the inevitable local increase in temperature along the reactor.

Consequently, this invention solves the need of a capillary sonoreactor that vibrates homogeneously, efficiently, scalable for long reaction lengths, and with a precise temperature control.

The Photochemistry and Semiconductor Electrochemistry (GFES) research group of the University of Alicante has developed an innovative capillary sonoreactor with a helicoidal probe that homogenizes the acoustic field generated without the appearance of longitudinal nodes/antinodes which avoids clogging with a rigorous temperature control.

The sonoreactor consists of a series of piezoelectric transducers stacked and attached to the probe which acts as a waveguide. Figures 1 and 2 show two forms of the ultrasonic capillary reactor which fundamentally comprise a power ultrasonic transducer that transforms electrical to mechanical energy using a control system that adjusts the frequency and amplitude of the signal. The probe, also known as sonotrode, features elements that increase the homogeneity of the acoustic field, as it can be seen in the nodes and antinodes marked as light and dark areas, respectively (Figure 1). 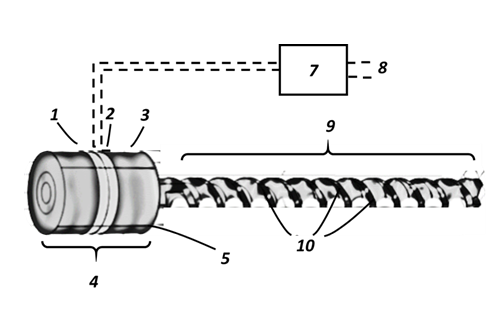 Figure 1. Perspective view of the invention, with the helicoidal acting as a guide wave that homogenizes the acoustic field. 1 and 3. Mechanical elements; 2. piezoelectric ring elements; 4. power ultrasonic transducer; 5. coupler; 7 and 8 control system and electrical power; 9. Ultrasonic probe with tubing. 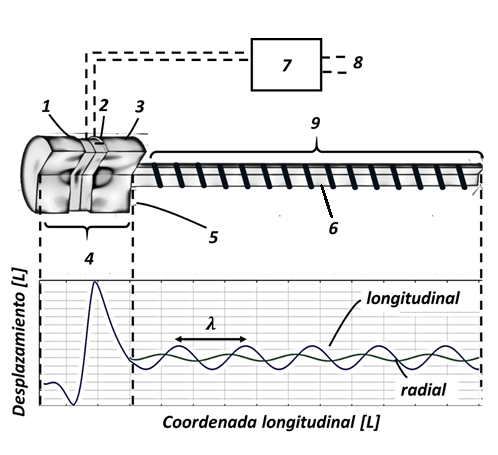 The capillary tube fits into a mechanized cavity that transmits vibrations with different modes: torsional, longitudinal and radial, which homogenize the acoustic field along the reaction medium.

The design allows more complex configurations; increasing the number of transducers, number of probes or adding secondary forms to the probe by curling or folding on itself, or other possibilities. For example, folding the probe with a helical design and curling on itself would allow space to be reduced. On the other hand, additional power ultrasound transducers could be used for energy recovery, from mechanical to electrical, or to add secondary vibration modes.

The efficiency and high homogeneity achieved by the present invention allows working in at least two modes of operation:

• low power ultrasound, where the amplitude of the vibrations transmitted to the tube is sufficient to reduce the risk of clogging, but not to induce significant changes in temperature or chemical effects;

• high power ultrasound, where the amplitude of the vibrations and corresponding values of acoustic pressure can generate acoustic cavitation suitable for different physicochemical processes such as those related to sonochemistry or enhanced mixing.

For temperature control, the inner part of the helicoidal probe can be used by means of secondary tubing and a thermal paste to improve the heat transfer but not the transmission of mechanical vibrations. In addition, an external thermal system, for cooling or heating, or a forced air system can also be implemented.

MAIN ADVANTAGES OF THE TECHNOLOGY AND INNOVATIVE ASPECTS

The main innovative aspect of the capillary sonoreactor is its scalability using ultrasound which enables process intensification via enhanced heat and mass transfer of multiphase (gas-liquid-solid) mediums.

The design of the ultrasonic capillary reactor gives it a number of advantages:

• The homogeneous distribution of the acoustic field eliminates the limitation imposed by longitudinal stationary waves, even at low ultrasonic frequencies (~20-40 kHz).

• The direct and efficient solid-solid-fluid transmission of acoustic power to the liquid contained in the capillary tube allows the use of different materials, diameters and lengths.

• Vibration is transmitted by the solid material of the probe, generally metallic, which reduces attenuation losses and enables efficient sonication in long probes, in the order of meters, to allocate different reactor lengths.

• The efficiency of the design allows to operate both at low and high ultrasound power. Thus, acoustic energy can be used to favour various physicochemical processes such as mixing in single- or multi-phase media with or without cavitation and/or to reduce the limitations of handling suspended solids, mitigating or eliminating clogging.

• Insulation of the reaction medium and the sonotrode which avoids metal contamination due to cavitation erosion independently of the capillary tubing material required (e.g. PFA polymers have been used successfully as capillary tube).

• The high surface/volume ratios of the capillary allow optimal control of the reactor temperature using forced ventilation or a thermal secondary tube in contact with the probe.

• The separation distance between the piezoelectric transducer and the sonicated medium minimizes mechanical heat and can also be used to amplify the received acoustic power by changing the probe's cross section.

• The probe design also supports an additional transducer at the free end of the probe for excitation at secondary frequencies or energy recovery.

• The helicoidal arrangement of the probe can be longitudinal, folded, curled or adapted to different shapes to reduce the space occupied by the reactor. The same ultrasonic transducer can emit a plurality of shaped probes.

• To avoid clogging, certain areas of interest, such as probe ends, can be used to house fittings, T-joints and/or mixing devices.

• Capillary tubes can be located on other surface of the sonotrode or via tube-in-tube configurations with different points of insertion.

The research group owns a laboratory-scale prototype which has been featured in a peer review international journal.

The invention provides an advantage in flow chemistry and process intensification with several applications in the pharmaceutical industry, fine chemistry, and in sonochemistry. The ultrasonic capillary reactor enables continuous manufacturing in chemical or physical processes (crystallization) allowing the handling of solids and/or the improvement of heterogeneous mixtures (gas-liquid-solid) in capillary tubes of variable diameter and length with optimal temperature control.

The research group is looking for companies interested in acquiring this technology for commercial exploitation through:

- Technical cooperation (R&D projects) to adapt the technology to the needs of the company.