The CSIC and University Pablo de Olavide have developed a system for warning possible failure of the anaerobic digestion process carried out in a digester, using a microbial fuel cell connected to the digester by recirculation. This system is called Previous Destabilization Alarm for Anaerobic Digesters (PDAL). Companies interested in the license of the patent are searched for commercial exploitation.

The CSIC and University Pablo de Olavide have developed a system for warning possible failure of the anaerobic digestion process carried out in a digester, using a microbial fuel cell connected to the digester by recirculation. This system is called Previous Destabilization Alarm for Anaerobic Digesters (PDAL).
Companies interested in the license of the patent are searched for commercial exploitation. 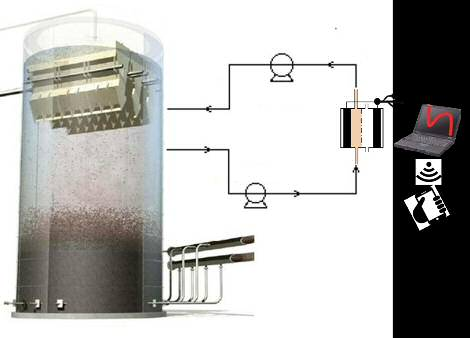 Immediate fault detection and early correction Anaerobic digestion is a process for the treatment of organic waste carried out by the action of microorganisms, that operating in the absence of oxygen, transform these residues into biogas. This is a very sensitive process due to the high number of factors that affect the activity of the microorganisms, and that could cause failures in the process. The PDAL system allows to anticipate possible critical, or even irreversible, failures of the anaerobic digestion process in real time, by measuring the electrical potential generated in the microbial fuel cell, which is directly related to the microbial activity of the microorganisms present in the reactor. When significant variations of this electrical potential are produced the system issues a failure warning before the destabilization of the process is irreversible.

 The detection of anomalies in the process is immediate independently of the kind of anomaly.
 The · PDAL system allows implementing an early action of correction of failures.
 The inoculation of the device does not require prior manipulation or extraction of the digester content.
 The microorganisms present in the device are the same as those of the digester.

Institute of Thermal Power Engineering is providing research and education in the field of energy technologies. The Institute covers a wide area of energy research, from expert works for the power sector, to investigations of the most advanced technologies for energy generation

Laboratory device to measure gas diffusion coefficients at real conditions.A portable spectrometer’s accessory to measure reflectance of undisturbed soil in the field under all conditionsRisk management of the effects of solar activity: Device and procedure of obtaining in real time and high resolution, the Local Geomagnetic Disturbance at middle latitudes.GEISER Research Group and its Power Electronic LabBiogas dryer. For biogas water vapor removing