New compound to successfully treat degenerative diseases of the retina

The research group "Neurobiología del sistema visual y terapia de enfermedades neurodegenerativas" of the University of Alicante has discovered the use of the compound 3-(2-isothiocyanatethyl)-5-methoxy-1H-indol, and its pha

The research group "Neurobiología del sistema visual y terapia de enfermedades neurodegenerativas" of the University of Alicante has discovered the use of the compound 3-(2-isothiocyanatethyl)-5-methoxy-1H-indol, and its pharmaceutically acceptable salts, for the preventive or therapeutic treatment of degenerative diseases of the retina, such as: pigmentary retinosis, diabetic retinopathy, glaucoma or age-related macular degeneration.

This compound has demonstrated, in vitro and in vivo, its neuroprotective capacity in various models under laboratory conditions. This compound is characterized by a 20% increase in neuronal survival, a 35% increase in visual acuity, and a 15% increase in contrast sensitivity. Therefore, it has very promising properties that could position it as the first effective treatment against degenerative diseases of the retina. We are looking for companies interested in acquiring this patent for commercial exploitation.

Retina is a well-structured and highly specialized neural tissue. Despite its peripheral location, it is as sensitive as other tissues of the central nervous system. In addition, it is one of the tissues most susceptible to damage by reactive oxygen species.

The various degenerative diseases of the retina lead to cell death and alteration of synaptic connectivity. They are influenced through factors such: as the increase in protein oxidation, and the failure of antioxidant defences.

Oxidative stress is recognized as one of the markers of aging. In this sense, the activation of routes mediated through Nrf2 can increase survival in different models of neurodegenerative diseases. These pathways are less active or deregulated during aging, in neurodegenerative processes, and in age-related degenerative processes. Inhibition or deregulation in this type of routes can aggravate oxidative stress in this type of pathologies, as well as increase the inflammatory phenotype. However, signalling via Nrf2 may protect against inflammatory pathologies.

All retinal disorders are common:

• With a marked oxidative stress.

Oxidative stress plays a fundamental role in the degeneration of the retina, with implications in: age-related macular degeneration, diabetic retinopathy, retinitis pigmentosa and glaucoma.

Oxidative stress is not only due to the excessive production of reactive oxygen species, but can also be produced by a decrease in the activation of Nrf2. Therefore, Nrf2 route is suggested as a possible therapeutic target in the prevention and treatment of this type of pathologies.

On the other hand, microglia cells have a protective effect on the damaged retina. However, its excessive or prolonged activation produces a chronic inflammation with secretion of inflammatory cytokines that produce serious side effects, can even trigger irreversible neuronal death.

Degenerative diseases of the retina such as glaucoma, retinitis pigmentosa and age-related macular degeneration are characterized by a scenario of neuroinflammation and chronic activation of the microglia. Thus, selective inhibition of microglia overactivation and preservation of its trophic and homeostatic functions may contribute to reducing photoreceptor degeneration, and could therefore be a promising treatment for degenerative diseases.

Finally, the proper functioning of the retina requires a balance between the processes of proliferation, differentiation and cell death. Certain genetic mutations, age and environmental factors can trigger specific genetic mutations that induce death via apoptosis in photoreceptors.

The final result between survival or cell death is the consequence of a complex balance between proapoptotic and antiapoptotic processes at various levels: extracellular, mitochondrial, nuclear and cytoplasmic.

Currently, pharmacological treatment of degenerative diseases of the retina focuses on two main lines of action:

1. In the use of preventive strategies that attempt to counteract the underlying mechanisms of the disease, such as gene therapy.

2. In attempting to prevent cell death by administering anti-inflammatory and antiapoptotic compounds (e.g. a cocktail of antioxidants), as well as neurotrophic factors that delay cell death of the retina, thus slowing the progression of the disease.

Degenerative processes of the retina have a great impact on the quality of life of patients. In this sense, it is particularly interesting to find suitable pharmacological treatments.

The present invention refers to the use of the compound 3-(2-isothiocyanatethyl)-5-methoxy-1H-indol as a therapeutic strategy to avoid, prevent or mitigate retinal degeneration in diseases such as: retinitis pigmentosa, glaucoma, age-related macular degeneration and diabetic retinopathy, thanks to its potent antioxidant and cytoprotective effect.

The chemical formula of this compound is the following (see Figure 1):

In the preventive or therapeutic treatment of the degenerative diseases of the retina described above, the compound 3-(2-isothiocyanatethyl)-5-methoxy-1H-indol can be used, as well as its pharmaceutically acceptable salts from: organic acids, inorganic acids, metallic salts, ammonium salts, salts formed from organic bases, and salts with amino acids.

Preparation: this compound is easily prepared through different methods described in the scientific literature. Soluble complexes can be prepared with different excipients.

Administration: the pharmaceutical composition can be administered in daily doses orally, rectally, subcutaneously, intramuscularly, intravascularly, injectablely or intravenously. It may be administered locally as a solution (e.g., eye drops, intraocular injection, or intravitreal injection), or as an implant.

Different animal models of retinal degeneration have been studied, among them:

The compound of the present invention significantly increased neuronal survival. In fact, the viability of the 661W cell line increased up 20% respect to the control (see Figure 2). 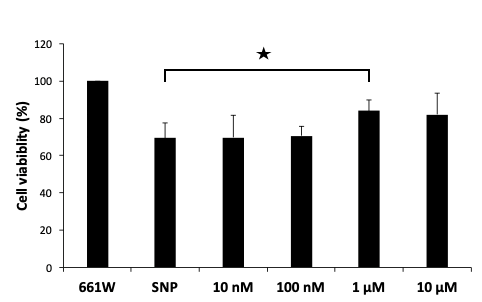 Figure 2: effect of the compound on the viability of 661W cells exposed to sodium nitroprusside 0.3 mM.

The murine strain rd10 is the most suitable model for testing therapies related to retinitis pigmentosa. Different doses of the compound administered intraperitoneally have been studied, from the beginning to an advanced stage of the degenerative process, and it has already proved that the compound exerts a protective effect, and therefore, it is an effective agent to treat retinitis pigmentosa.

3. Measurement of the amplitude of the electroretinogram (ERG):

There is a certain dose of the compound (10 mg/Kg) that achieves a statistically significant improvement in the functional response of the retina respect to control (see Figure 3).

Figure 3: Stimulus-response curves of the amplitude of the electroretinogram (ERG) of scotopic rd10 mice treated with a vehicle (control), or with 10 mg/Kg of the compound.

4. Measurement of visual acuity and contrast sensitivity in the murine model rd10:

Visual acuity: it gives a measure of the functional activity of the retina. To do this, an optomotor test is performed. This test showed that in rd10 mice treated with the compound object of the present invention (a dose of 10 mg/Kg), visual acuity increased 35.6% respect to control (see Figure 4). 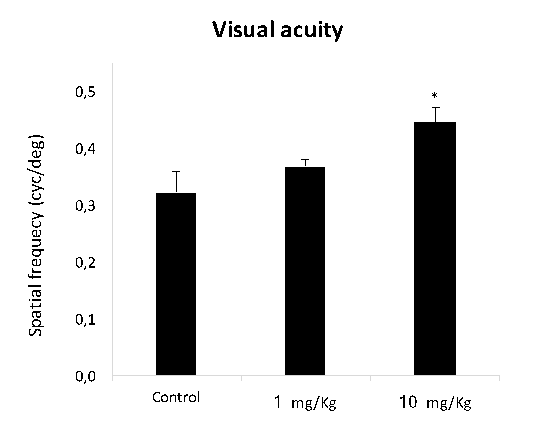 Figure 4: visual acuity measured as spatial frequency in cycles/grade reached by rd10 mice treated with vehicle (control), and by mice treated with the compound at 1 mg/Kg or 10 mg/Kg from P16 to P30, intraperitoneal, twice a day.

Contrast sensitivity: in animals treated with the compound (a dose of 10 mg/Kg), contrast sensitivity increased between 11% and 15% with respect to the control, depending on the spatial frequency of the stimulus (see Figure 5). 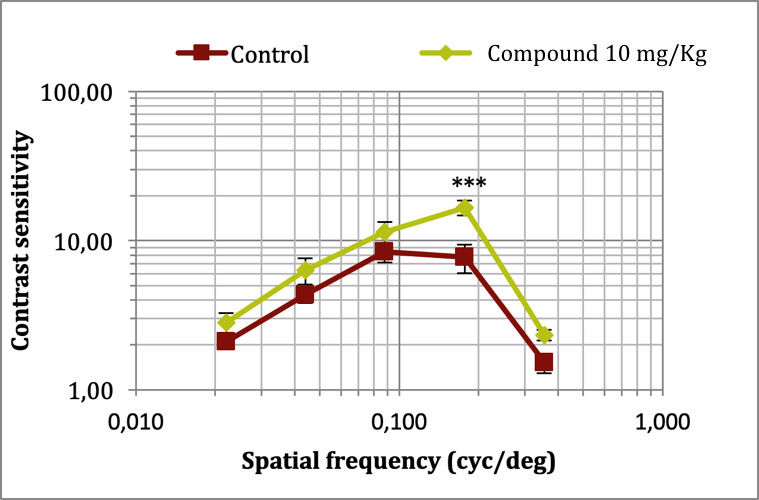 Figure 5: contrast sensitivity measured at different spatial frequencies in cycles/grade achieved by rd10 mice treated with vehicle (control), as well as for mice treated with the compound at 10 mg/kg from P16 to P30, intraperitoneal, twice daily.

ADVANTAGES OF THE TECHNOLOGY

The compound which is the subject of this invention has demonstrated the following advantages over the medicines currently used to treat degenerative diseases of the retina (including melatonin and sulforaphane):

1) It possesses a combination of biological activities whose great therapeutic effect.

2) It is a powerful inducer of the signaling pathway Nrf2, effect that does not possess melatonin.

The compound of the present invention differs from the current drugs because:

• It is a powerful inducer of the signalling pathway Nrf2, unlike melatonin.

• It is an effective antioxidant, unlike sulforaphane

The protective and reducing effects of retinal degeneration provided by the compound of the present invention have been successfully studied under the following laboratory conditions:

1. In vitro: it has been studied in the cell line 661W (derived from photoreceptors) subjected to damage by the oxidizing agent sodium nitroprusside. Cell viability has been studied and this compound has been shown to increase neuronal survival up 20%.

2. In vivo: it has been studied in the mice model rd10 (autosomal recessive inheritance pigmentary retinosis model). The neuroprotective capacity of the compound has been measured after administering 2 different doses, at the rate of 2 doses/day intraperitoneally, from the postnatal day P16 to P30. This compound has been shown to improve the functional response of the retina, and increases both visual acuity (up to 35.6%) and contrast sensitivity (from 11% to 15%).

The present invention is framed in the pharmaceutical sector, specifically, in the preventive or therapeutic treatment of the degenerative diseases of the retina, that cause destruction of cellular structures, such as:

We are looking for companies interested in acquiring this compound for commercial exploitation through:

• Agreements regarding technology and knowledge transfer.