Other : Technoloy, plant and machinery (EPC)

Renewable Biochemicals Technologies (fermentation and catalysis based) available for liscencing

The new lupeol derivative and the method of obtaining.

This invention relates to a biologically active compound, the derivative of natural triterpene lupeol. This derivative is active for human skin cells, improving their proliferation process. In addition, the substance has the ability to neutralize free radicals. The described derivative can be used as an active ingredient in pharmaceutical and cosmetic preparations dedicated for damaged or burned skin, as well as in anti-aging cosmetics.

The developed solvent-free technology allows API synthesis under microwave irradiation with high purity and efficiency in a very short time. Its advantages include the absence of toxic solvents, an easy way to isolate products from the reaction mixture, significantly reduce the amount of additional technological operations, reduce production costs and increase work safety. The technology can be used on an industrial scale.

During extracorporeal blood treatment, air bubbles often build up in the bloodstream. This occurs as a result of i) microleaks in the connections between the various tubes used, and ii) degassing effects from the blood itself. Ultimately, the presence of air in the bloodstream can lead to fatal (micro) embolisms when circulated back into the patient, hence a need to have technologies that remove the air from the bloodstream. The problem is particularly relevant for microbubbles (2.5 to 50 µm diameter), whose presence in the bloodstream is extremely difficult to detect with current state-of-the-art, and to which current removal solutions fall short. The Current Solutions in the market: The most popular way for air bubbles removal is through the use of drip chambers, common in intravenous therapies and that are located just before the bloodstream returns to the patient. It constitutes a filled blood reservoir through which the bloodstream passes, causing air bubbles to rise to the surface of the reservoir and being released. However, drip chambers present two limitations: •Being a technology that involves a stagnant blood-air interface, blood clotting is promoted; and •So-called microbubbles (2.5 - >50 µm), having lower buoyancy, will not rise and will stay in the bloodstream. Part of the microbubbles may be removed when passing the treatment unit but this is insufficient to completely eliminate the microbubbles and the corresponding risk. Another possibility to remove air bubbles is by reducing the blood flow, hence increasing the probability of microbubbles redissolving in the blood or collapsing, so that the effects of sucking air in through the needle at the beginning of the extracorporeal circuit is evened out when the blood is fed back through the second needle into the patient. While this approach can be quite efficient, it has the downsides of i) requiring lower blood flows that lead to slower treatments (high flows are preferred) and ii) being a reactive strategy instead of a continuous air bubble removal technology.

Carbosilane dendrimers with terminal thiol groups on their surface. Their preparation and their uses.

The research group in «Dendrimers for biomedical applications» of the University of Alcalá presents the procedure for obtaining and using carbosilane dendrimers with terminal thiol groups on their surface, as antioxidants and radical scavengers for their application in the food industry, cosmetic and pharmaceutical. The group seeks to reach licensing agreements, collaboration agreements or commercial agreements with technical assistance, with enterprises from the food industry, cosmetic, biotechnology, Biomedicine or pharmaceutical sector.

New effective and eco-friendly product to destroy Helicobacter pylori on the basis of plant components to which the bacteria can not become resistant.The product prevents stomach cancer, stomach ulcer, chronic gastritis, duodenal cancers and can alFormulations for ready-to-eat Portuguese custard tart after microwave oven re-heatingFuture Meat Technologies LTD.Efficient and selective magnetic adsorbent for removal of purine compounds and nucleic acids from liquid matrices 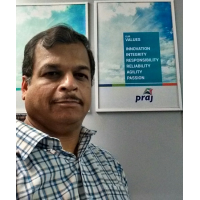 Sign in to Innoget to connect with Mahesh Kulkarni and other leading innovators and researchers that matter.