Researchers from the University of Alicante have developed a control system, which allows a greater versatility in flight for UAVs (Unmanned Aerial Vehicles also colloquially called drones). With this system a vehicle can switch between different flight plans or define in real time the optimum aircraft movement depending on the environment and the information received by its sensors. Moreover, this system also includes a communication mechanism that allows a ground station to define new flight plans while the aircraft is in the air. This system is a significant advance over existing systems, as latter ones require prior planning to take off and have a reduced flexibility when the vehicles are in flight. It is applicable to all types of aircraft using the communication protocol MAVLINK. 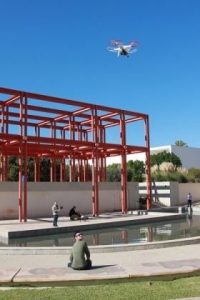 Researchers from the University of Alicante have developed a control system, which allows a greater versatility in flight for UAVs (Unmanned Aerial Vehicles also colloquially called drones). With this system a vehicle can switch between different flight plans or define in real time the optimum aircraft movement depending on the environment and the information received by its sensors. Moreover, this system also includes a communication mechanism that allows a ground station to define new flight plans while the aircraft is in the air.
This system is a significant advance over existing systems, as latter ones require prior planning to take off and have a reduced flexibility when the vehicles are in flight. It is applicable to all types of aircraft using the communication protocol MAVLINK. 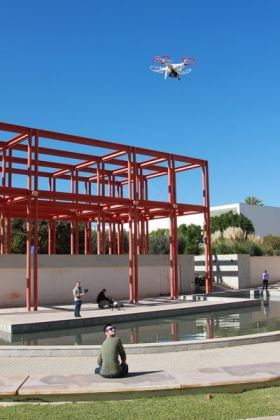 This system allows developing dynamic flight behaviours using a high-level planning of the control board. It uses non-proprietary protocols and widespread technology, so that it can be implemented in different types of vehicles.

Therefore, the system allows the aircraft to carry out an intelligent flight. It can react to changing circumstances or dynamic objects and for example can track specific landmarks.

This aspect is highly innovative and makes work easier for users. The drone does not require constant monitoring and has the autonomy to modify its path to the ultimate goal of fulfilling its mission.

The system developed by the researchers attempts to overcome the limitations of current flight control systems and propose a truly autonomous and flexible system based on its own model.

In this way, a small electronic device, that incorporates a software system developed by the researchers, was designed. This device connects to the drone by MAVLINK protocol. Specifically, the device is linked with the drone flight controller (which manages the different elements that are used to stabilize and manoeuvre) and also with sensors and communication systems, which provide information about the environment. This sensor array can be expanded by incorporating any supported sensor with USB, RS232 or I2C protocols.

The system has a number of software subsystems that allow it to interact with the outside, receive data, interpret it and execute the necessary actions.

The drone can communicate with the ground station through the communications subsystem and send data about the flight or information collected by its sensors and cameras. From the station, a person can send data to the drone, even assign new instructions or flight plans when the aircraft is flying.

In short, using the developed system, the drone can be managed properly by a human operator, either following a fixed flight plan or in a autonomously way based on a dynamic flight plan where the aircraft will define its next movement depending on its state, the circumstances detected by the sensors and the instructions received from the base.

This system also enables communication with other similar vehicles allowing a drone to establish a group of flying aircrafts, providing new features and potential applications that an individual drone cannot develop.

The flight planning method includes the following steps to control the aircraft:

Developed technology is applicable in all types of unmanned aerial vehicles to implement flight controllers compatible with MAVLINK protocol. These aircrafts can have both civilian and military uses. It is particularly interesting for their application in the flight planning of robotic swarms.

This technology is protected by patent application.

There is a prototype of the technology that has been tested in standard aircraft and also conducting complex missions, with optimum results.

The group is looking for companies interested in acquiring this technology for commercial exploitation through patent licensing agreement.

In addition, the research group has extensive knowledge in flight systems, artificial intelligence and unmanned vehicles. In this way it can provide expertise to solve the technological needs of enterprises in these areas.

SEDATIR lets us monitor a real-time application to get a better throughput because the tasks do not include any additional code (library) and the monitoring is done when the routines of the operating system are executed. SEDATIR shows graphically a temporal evolution of the different tasks when they are running on the external platform (see Additional information paragraph). By means of this graphic the user can see the state (run, wait, ready, idle, inside of a critical section) in which each of the tasks is in a specific instant of time. SEDATIR adds a real-time operating system to the application developed by the user.

- These systems support the conduction as an alert to the conductor in situations of imminent danger or when the conduction is not suitable. - The developed systems show a high capacity of anticipation and a percentage of false alarms practically null. - The group has developed several types of techniques of attendance to the conduction based fundamentally on vision by computer and laser.

FPGA are one of the most cost efficient alternatives for SoC implementation, specially those that are based in SW cores processors, but it doesn’t exist nowadays any tool with features similar to ours. Our solution offers a simulation speed more than 2•103 higher than the commercial options already in the market. In addition the former only allow to evaluate design performance by means of trial and error approach, being an extremely inefficient alternative.

UVIGO researchers have developed an accurate and reliable system for monitoring the durability of pantograph components preventing manual operator inspection. Based on artificial vision, this system measures the remaining thickness of the graphite layers of the collector strips. Automatic processing of collected data generates a 3D model of the strips, analyzing it to detect cracks and wear, which is crucial for pantograph maintenance.