The chiral-induced spin selectivity [1](CISS) effect, discovered in recent years by Prof. Ron Naaman from the Weizmann Institute of Science, implies that electrons transferred through chiral molecules possess a specific spin orientation. Since then, the CISS effect has been investigated in different applicative systems. The present innovation applies anodes coated by chiral molecules for hydrogen production through water electrolysis, leading to 30% increase in the efficiency of the electrolysis process compared to the procedure performed with uncoated electrodes. 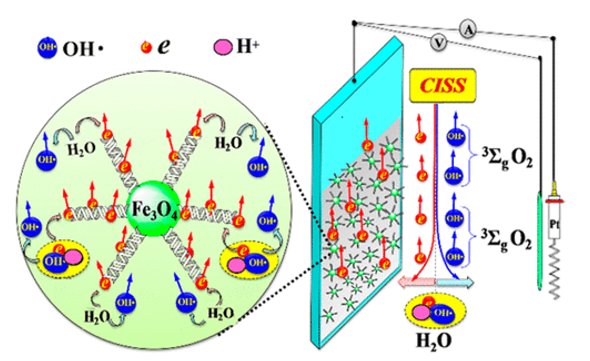 Hydrogen is the most efficient and environmentally friendly fuel; it possesses the highest energy capacity per unit mass and produces water upon combustion. However, production of hydrogen from water is hampered by the need to apply higher than theoretical voltage (“over-potential”) to initiate the reaction. These conditions involve extra energy consumption as well as lack of selectivity of the oxidation process, leading to oxidation of other molecules in addition to water and the formation of hydrogen peroxide.

Here we present spin-selective electrodes made from standard electrode material coated with chiral Fe3O4 nanoparticles. When used for electrolysis of water, the coated electrodes showed superior performance in comparison to standard electrodes, due to the elimination of the over-potential required for the process as well as selectivity.
A scheme of a photo-electrochemical cell used for water splitting. Chiral Fe3O4 nanoparticles are coated on the anode to eliminate the cell’s over-potential.

The 2019 global annual hydrogen generation totals approximately 60 million ton. Only 4% of the current generation is from water electrolysis, while the rest is from steam-methane reforming and coal gasification. However, there is a large potential for growth in the electrolysis segment driven by: decreasing electrolyser CAPEX, decreasing electricity prices and increasing utilization of renewable energy sources due to climate change concerns. These drivers, along with technological development in electrolyzer efficiency, can push the hydrogen electrolyzer market over US$ 1 bn in the next decade.