The invention and device employs a novel and inventive decision‑making algorithm, called AWakeOSA, that uses anthropometric information and a few minutes of tracheal breathing sounds recorded during wakefulness to identify OSA individuals in need of treatment. This algorithm considers the confounding anthropometric effects on the breathing sounds and uses them to predict the severity of OSA in a subgroup with a similar confounding variable. 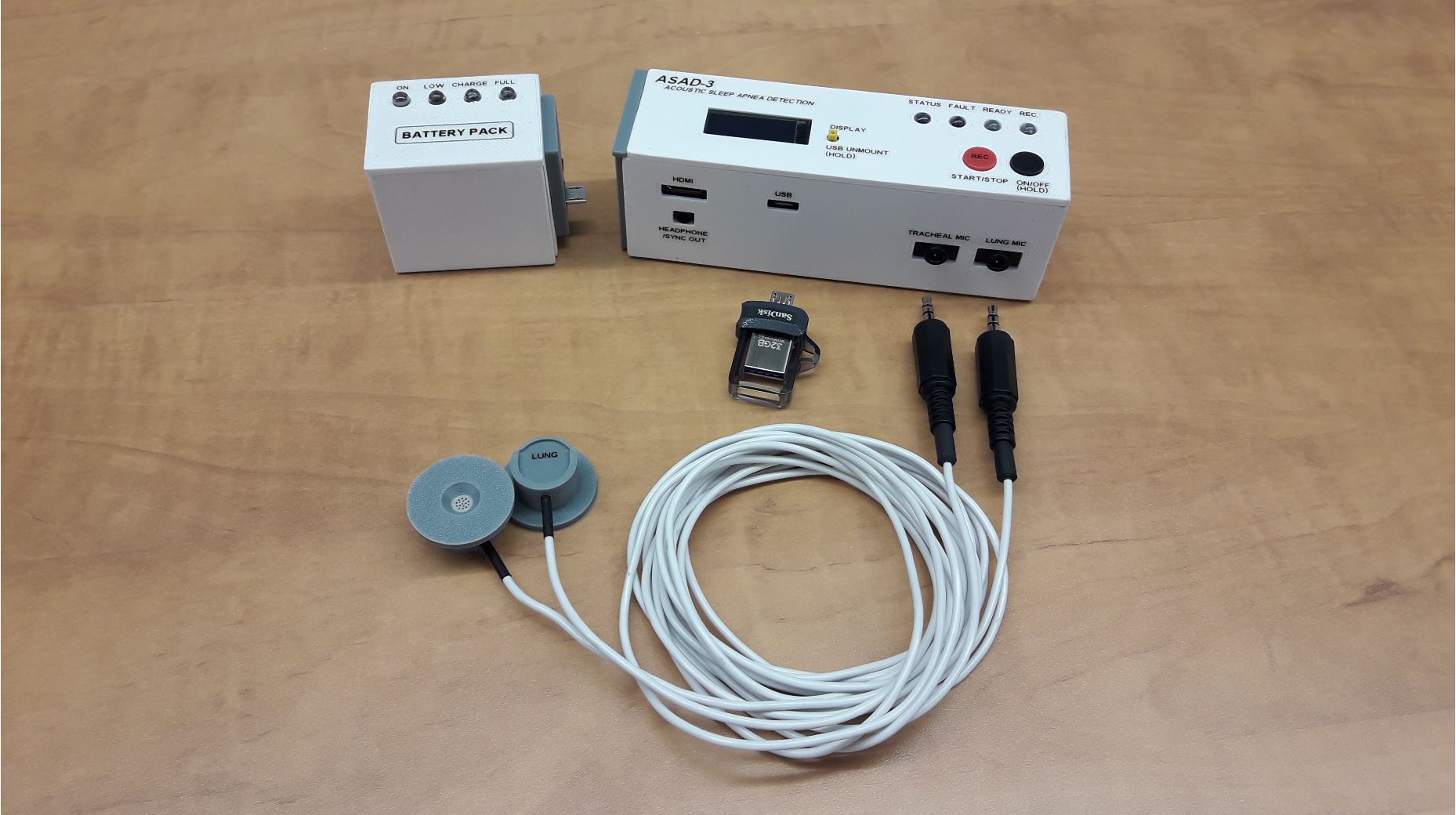 Obstructive sleep apnea (OSA) is a common syndrome characterized by repetitive episodes of complete (apnea) or partial (hypopnea) pharyngeal collapse during sleep. OSA affects about 10% of the Canadian and American population and up to one billion people globally; yet it is under diagnosed.In the US, the added cost on untreated sleep apnea (direct and indirect costs) are estimated to range between 65 and 165 billion annually.

The severity of OSA is commonly measured by the apnea/hypopnea index (AHI), which is the number of apnea/hypopnea episodes per hour of sleep. Usually, an AHI<5 is considered as non‑OSA, 5< AHI <15 as mild, 15< AHI <30 as severe OSA. Clinically, however, it is common practice to consider individuals with AHI <15 as those who may not benefit from treatment, and therefore an AHI of 15 is used as a threshold to determine severity.

The gold standard for OSA diagnosis is an overnight Polysomnography (PSG) assessment. However, it is costly and time‑consuming. There are many portable monitoring devices for OSA, but they all require an overnight recording. Another OSA screening tool that is commonly used for patients undergoing surgery requiring full anesthesia is the STOP‑BANG questionnaire. However, while this screening tool is conducted during wakefulness and is reported to have high sensitivity, it has very poor specificity (~30%).

The use of tracheal breathing sound analysis during wakefulness has also been proposed for screening OSA. Several research groups around the globe have been working on the possibility of using either tracheal breathing or vocal sounds during wakefulness to predict OSA. In comparison to the STOP‑BANG questionnaire, the research groups reported comparable sensitivity and specificity, few reported blind test accuracy, and sample sizes were quite small given the heterogeneity of the OSA population.

We have developed a device that utilizes a novel OSA classification procedure that quickly and accurately (sensitive and specific) screens patients at risk for sleep apnea, based on their personalized anthropometric information during wakefulness.

The invention and device employs a novel and inventive decision‑making algorithm, called AWakeOSA, that uses anthropometric information and a few minutes of tracheal breathing sounds recorded during wakefulness to identify OSA individuals in need of treatment. This algorithm considers the confounding anthropometric effects on the breathing sounds and uses them to predict the severity of OSA in a subgroup with a similar confounding variable (Figure 1. Prototype of the device).

The device records tracheal breathing sounds, preferably using a flat‑response wide‑frequency range microphone inserted into a plastic microphone coupler delimiting a conically‑shaped air chamber between the microphone and skin. The acoustic signals are routed through a bandpass filter and amplifier, and converted to a digital signal and stored as digital audio data.

The audio recordings are separately made in supine and upright positions both with and without the subject’s head resting on a pillow. The subjects are instructed to breathe multiple deep breathing cycles through their nose with their mouth closed, followed by multiple deep breaths through their mouth while wearing a nose clip. The recording procedure is employed for “test subjects” whose recording are used as training data to: a) build a computerized OSA screening tool and b) for “patients” whose recordings are being used to classify those patients as either OSA or non‑OSA using the trained screening tool.

i. extract at least spectral and bispectral features from the audio data recording;

iii. based on the anthropometric data, divide the subject datasets each of the high‑severity and low‑severity groups into a plurality of anthropometrically distinct subsets;

v. use the derived input data to train a classifier to classify a patient as either OSA or non‑OSA

b. Performing an OSA screening test on a patient

i. obtain computer readable media on a trained classifier derived in steps a (i‑v) above

ii. read the anthropometric data of the patient dataset, and run the trained classifier multiple times, accounting for pertinent features, spectral and bi‑spectral features; thereby classifying the patient as either OSA or non‑OSA.

The only current technology that screens for OSA during wakefulness is the STOP‑BANG questionnaire. Although the questionnaire provides up to 70% accuracy and up to 40% specificity, but our novel invention can reach >90% for both accuracy and specificity for OSA. The other robust assessments available on the market, such as PSG and use of portable devices for screening OSA at home, typically require approximately six hours of recording and two hours of analyses. By comparison, our device is more accurate and can screen for OSA in 10 minutes, and patients can also be screened for OSA during wakefulness.

Recently, numberous studies have demonstrated that surgical patients with OSA are at increased risk of having perioperative complicaitions. Surgical patients with OSA that receive medications to induce sedation, and to relieve pain post-operatively may experince increased pharyngeal collapse, decreased ventilatory response, and impaired the arousal response. Since the majority of patients are unaware of their sleep apnea prior to undergoing elective surgery, our device may help to properly identify and screen patients to reduce the risk of perioperative morbidity or mortality after surgery.

Assists in a decision making routine to predict the likelihood of OSA for each individual patient.

The University of Manitoba is actively seeking a licensee to license the patent to move this technology to the market.

The University of Manitoba also readily welcomes interactions with any investor or entrepreneur that would like to license the patent to create of a start‑up based in Manitoba, or outside of the province.