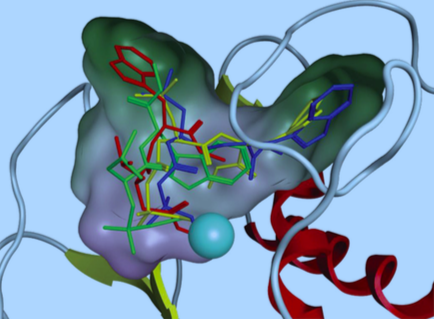 Matrix metalloproteinases (MMPs) are a family of structurally related zinc-containing enzymes that are implicated not only in cancer progression but also inflammatory and degenerative disease processes, which are based on the breakdown of ECM. Therapeutic MMP inhibitors (MMPIs) have been developed to target specific MMPs linked to several types of conditions (e.g. disorders and/or diseases) such as arthritis, osteoporosis, multiple sclerosis, atherosclerosis, and carcinomas.

Glioblastoma multiforme (GBM) is a malignant tumour of the brain accounting for more than half of all astrocytoma cases and other central nervous system cancers. High-grade gliomas are characterized by proliferation, necrosis, angiogenesis, invasion and evasion of apoptosis. Despite radical treatment encompassing surgical resection, radiation and chemotherapy, the GBM patients have a poor outlook. A major factor underlying the lethality of GBM, is the acquisition of therapeutic resistance and the presence of diffusely invading cells which render the complete surgical resection difficult. Patterns of relapse in glioblastoma multiforme following concomitant chemoradiotherapy with temozolomide.

Infiltration of cancer is reliant on the coordination of the tumour microenvironment. In particular, the extracellular matrix (ECM) is a regulator of cancer cell invasion, migration and proliferation. Identification of genes that are differentially regulated by invasive glioma are of interest. As there is a correlation between patients outcome with the activities of proteases within the extracellular space, GBM processes that are mechanistically dependent upon certain proteases, such as MMPs, may be treated using MMPIs.

There is a need for MMPIs to treat MMP dependent cancers, such as GBM, and other MMP implicated conditions.

The vast majority (>95%) of MMP inhibitors (MMPIs) that have been developed thus far utilize a hydroxamic acid (HA) functional group to mechanistically bind and inactivate a catalytic zinc. Unfortunately, HA‑based MMPIs have under gone clinical trials have failed due to unforeseen “off‑target” effects, including muscle pain. A number of explanations for these failures have been proposed/identified, including, intrinsic limitations of HA moieties to undergo rapid metabolism & decomposition.

To address these needs, researchers have developed (synthesized, assayed, docking studies, and demonstrated utility) a novel class of MMPIs utilizing the sulphonamide moiety as the MMP zinc‑binding group (ZBG).

In the present work ilomastat was used as a template to develop derivatives to inhibit MMP3. For ilomastat and synthesised compounds, NFF-3 and zymography assays showed a significant correlation between the experimental and theoretical results. Linear regression models provided may be used for the predict in silico performance of future MMPIs at 50 and 100 uM, within a complex matrix, representing the environment and MMP3 expressed by high motility C6 cells.

In addition to the experimental work several ilomastat derivatives were computationally investigated to evaluate their potential as MMPIs. All derivatives contained the same backbone, but with different ZBGs. Specifically, all analogues contained a sulphonamide
ZBG.

Ilomastat and its derivatives were docked and scored, generating their relative Gibbs free binding energies. The compounds with the greatest binding affinities, ilomastat, AP-6, and AP-7, all showed bidentate coordination with the Zn2þ ion. Moreover, these three compounds formed strong hydrogen bonding interactions with Glu202. It is noted that such an interaction has been previously deemed to be important in binding. To investigate the effect of protein dynamics on the inhibitory effects of the strongest binding compounds 10 ns MD simulations were ran. From the MD simulations, AP-6 and AP-7 showed a stronger Gibbs binding affinity
than ilomastat.

From this study it can be concluded that AP-6 and AP-7 show promising results as potential broad-spectrum inhibitors of MMPs. The selectivity of AP-7 to the Zn2þ containing MMPs versus non-zinc containing metalloproteins may be greater than AP-6 or ilomastat given the presence of the thiol in AP-7. Synthesis of AP-6 and AP-7 are currently underway to determine the effect on migration and invasion.

The importance of MMPs in cancer biology has led to the development of a large number of synthetic MMP inhibitors metal ion binds protein (MMPIs). Within the active site, a Zn substrates that are marked for degradation. As a therapeutic strategy, the majority of MMPIs utilise a strong zinc-binding group (ZBG) to inactivate MMPs.

Although the incorporation of the sulphonamides has been suggested to improve MMPIs by enhancing the molecule’s ability to form H-bonds, the exact mechanism of inhibition has not been sufficiently explored. To determine structure-activity relationship of sulfa-based inhibitors, researchers synthesised a small number of compounds (AP‑6, AP‑7) based on the ilomastat (Leu-Trp) backbone to measure MMP3-inhibitory performance within matrices relevant to GBM30.

Despite a significant body of data implicating MMPs in the invasion of cancer, the clinical potential of MMPIs remains largely unfulfilled. Researchers have demonstrated structural improvements based on incorporation of sulphonamide ZBG and in doing so, identify exploitable mechanisms of molecular recognition for the development of future inhibitors, including AP-6 and AP-7.

The University of Manitoba is actively seeking a licensee to license the patent to move this technology to the market.

The University of Manitoba also readily welcomes interactions with any investor or entrepreneur that would like to license the patent to create of a start‑up based in Manitoba, or outside of the province.