Researchers from Inorganic Chemistry Department at the University of Alicante have developed a new procedure to obtain heterogeneous monolithic catalysts with polymeric support that allow to accelerate catalytic reactions in an optimal way at moderate temperatures, being especially suitable in Preferential Oxidation of Carbon in Hydrogen Rich Gases (CO-PROX).

These novel catalysts have been manufactured by 3D printing with complex geometries, improving the performance of current supports. These heterogeneous catalysts are characterized because they have similar conversion and selectivity profiles to current unsupported powder catalysts. They have increased catalytic activity during prolonged reaction times and greater resistance to friction wear. We are looking for companies interested in acquiring this technology for commercial exploitation.

Catalysts used in heterogeneous catalysis consist of an inert support on which a phase with catalytic activity (active phase) is deposited.

The most relevant supports are monoliths with cellular structure (honeycomb). It is a set of parallel channels of millimeter size through which the fluid circulates, and in the walls of these channels that the active phases are supported. These monoliths are characterized because they are easily manipulated to install or replace them, they do not generate preferential paths in the fluid, they are robust, they present a great resistance to friction wear, they have low pressure drops and great characteristics of heat and mass transference.

The monolithic supports are used in a wide range of applications, among them the Preferential Oxidation of Carbon Monoxide (CO) in Hydrogen (H2) Rich Gases (CO-PROX). The CO-PROX is necessary for proper development of PEMFC Polymer-Electrolyte Membrane Fuel Cell.

In the CO-PROX reaction, the cell-structured monolithic support provides the best use of the active phase, as it allows more catalyst to be charged, as well as operating under more adiabatic conditions.

The use of honeycomb monoliths in heterogeneous catalysis is limited both by the technology available for their manufacture (they are manufactured by extrusion) and by the techniques available to support the active phases (they are subsequently incorporated after immersion in a dip-coating suspension, and the homogeneity of the coating is in doubt).

The use of polymeric materials to manufacture catalyst supports is simple and economic; however, currently it is not carried out due to the low thermal stability of polymers compared to ceramics, as well as the difficulty of supporting active phases in polymeric substrates.

Thermal stability is not an obstacle in low-temperature catalytic applications such as CO-PROX reaction. However, the adequate anchoring of the active phase on the polymeric support is an unresolved scientific-technical challenge.

Therefore, it is necessary to develop new heterogeneous catalysts able of being used in Preferential Oxidation of Carbon Monoxide (CO) in Hydrogen (H2) Rich Gases (CO-PROX).

In order to overcome limitations described above, a new heterogeneous catalyst have been developed comprising a polymeric support formed by a set of channels on, at least, one active phase (which is responsible for carrying out the catalytic reaction) is deposited homogeneously.

This polymeric support is preferably monolithic (see Figure 1) with any geometry (cube, sheet, disc, cylinder, etc.), and its main function is to disperse, stabilise and provide great mechanical properties to the active phase. In addition, it has a cellular structure and it is formed by a plurality of channels and surfaces that they may be smooth or have irregularities in their walls (for example: slits with different geometries, perforations, roughness, etc.). 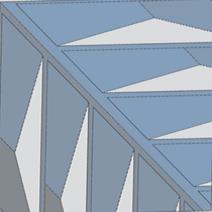 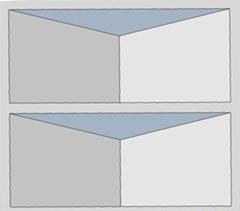 Figure 1: channel scheme of a monolith designed with prismatic slits along the channel walls.

These irregularities are full of active phase and they facilitate the homogeneous distribution along the channel walls of the monolith (see Figure 2), thus increasing its useful working surface. In addition, it prevents channels with an excess of active phase (that it could block channels and prevent proper circulation of the reagent), as well as channels with active phase defect (that it would be inefficient in accelerating the catalytic reaction). In this sense, both the excess and the defect of the active phase in the walls of the channels are a detriment to the overall efficiency of the monolithic catalyst. 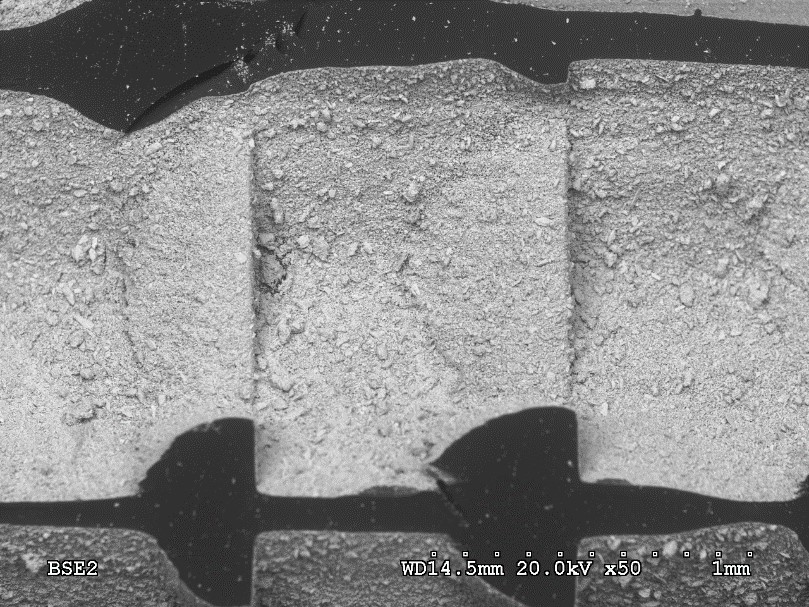 Figure 2: photograph taken by SEM microscopy showing the homogeneous distribution of the powder catalyst on the channel walls of a polymeric monolith.

On one hand, the monolithic support is a polymeric resin that is photosensitive to ultraviolet light and stable up to 300ºC, i.e. it is very suitable for catalytic reactions at moderate temperatures, such as Preferential Oxidation of Carbon Monoxide (CO) in Hydrogen (H2) Rich Gases whose useful operating range does not exceed this thermal stability limit.

On the other hand, the active phase is responsible for the catalytic activity and it allows to carry out the reaction of interest. There are different types of active phases, e.g. metals, metal oxides or combinations thereof. In this case, copper oxide (CuO) supported on cerium oxide (CeO2) has been used as active phase. The percentage by weight of the active phase in the catalyst is less than 6% (see Figure 3). 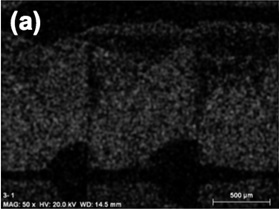 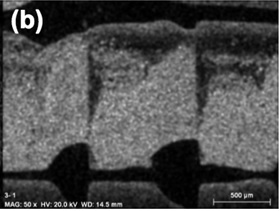 Figure 3: chemical analysis using EDS technique showing the distribution of the chemical elements of the CuO/CeO2 catalyst deposited in the channels of the monolithic support, being (a) Cu and (b) Ce.

Optionally, in order to improve thermal stability and increase the amount of active phase incorporated in the resin, different charges (e.g. carbon and/or silica) can be added in quantities less than 3.5% by weight of the total weight of the polymeric support.

The procedure to obtain this novel heterogeneous catalyst comprises the following steps:

1. To get monolithic form to the thermostable polymeric resin catalytic support through 3D printing, and later it is cured by exposure to ultraviolet light. Optionally, carbon and/or silica charges can be added to the liquid resin by magnetic agitation.

3. Rotate the product horizontally and dry it under dynamic conditions (rotation) to ensure that the active phase continues distributed evenly.

4. Heat treat in an inert atmosphere (e.g. nitrogen, argon or helium) to remove volatile substances from the substrate and strengthen the bond between the active phase and the substrate. Optionally, in order to eliminate the excess of active phase that could obstruct the channels of the support, a stream of compressed air can be used.

5. Heat treat in an oxidising atmosphere (e.g. air, oxygen or a mixture of oxygen and nitrogen) to improve the accessibility of the reagents to the active phases present on the channels.

ADVANTAGES OF THE TECHNOLOGY

The main advantages of this novel polymeric catalyst are listed below:

In recent years, packaged bed reactors and pellets used in the area of heterogeneous catalysis have been progressively replaced by cellular geometry monoliths. These monoliths exhibit great heat and mass transfer characteristics, low pressure drops, they are easily manipulated for installation and replacement, and they do not generate preferred paths in the fluid.

Commonly, monoliths are manufactured by extrusion, which it limits their geometry to straight and parallel channels. However, using 3D printing it is possible to design and manufacture monolithic supports with complex geometries that allow to improve the performance of the current supports at present.

Polymeric resin monoliths have been designed and manufactured by 3D printing for using as catalyst supports (see Figure 4), obtaining very satisfactory results and being pioneers in the use of polymers as monolithic supports in heterogeneous catalysis. 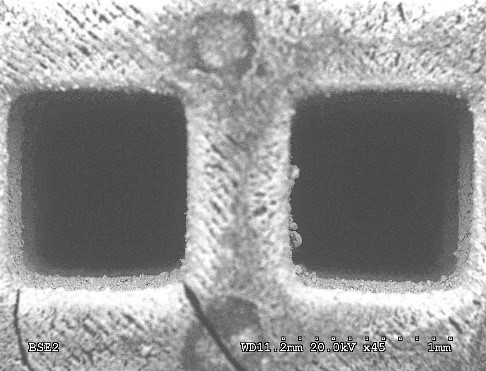 The current procedures to incorporate active phases in monoliths manufactured in non-polymeric materials (for example, cordierite or silicon carbide), are not applicable to polymeric resins due to the bad adherence of the catalyst to the support. However, following the procedure described in the present invention, a homogeneous coatingof the monolith channels is obtained with an adequate distribution of the active phases.

In this procedure, it is not necessary to carry out previous attacks on the resin, and a single impregnation step is sufficient to cover homogeneously the surface of the monolith channels.

In addition, after several experimental studies, it can be concluded that modifying the composition of the resin by adding carbon and/or silica charges, modifying the design of the channels from smooth to slits, and increasing the number of impregnation stages, it increases the percentage by weight of the active phase in the catalyst.

It can be concluded that the general behaviour of these novel catalysts is similar to the unsupported commercial powder catalysts, presenting qualitatively very similar conversion and selectivity profiles.

Furthermore, after 10 hours of reaction, both the conversion (95%) and the selectivity (90%) remain stable, thus demonstrating their great catalytic activity for prolonged reaction times (see Figure 5). 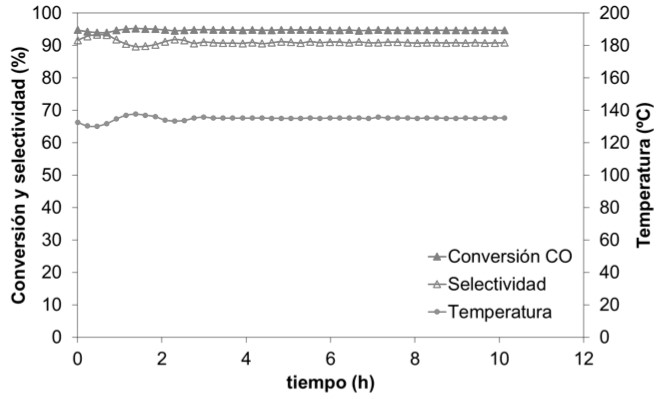 Figure 5: profiles of CO conversion and CO selectivity towards the product CO2 and temperature, in a stability test of 10 hours duration.

The present invention is framed in the field of heterogeneous catalysis, that is, in those reactions that take place when the catalyst is in a phase (solid, liquid or gas) different from the reagents.

This novel polymeric catalyst can be used in those catalytic applications that occur at a temperature lower than the degradation of the polymer, i.e. below 300ºC, for example, in Preferential Oxidation of Carbon Monoxide (CO) in Hydrogen (H2) Rich Gases (CO-PROX).

Henceforth, this technology finds its application in the following industrial sectors:

We are looking for companies interested in acquiring this technology for commercial exploitation through: