The invention provides a solution for the direct transportation of analog electrical signals, in particular radio signals, via a multi-mode optical fiber, so that it will be possible to transmit the transferred radio signal w

Wireless radio communication has witnessed rapid growth in the past few years. Not only for public mobile telephony and data transmission, but also for use as wireless local networks to be used for business and private purposes. The growing number of users, in particular for business applications, as well as the bandwidth required for each user, necessitate ever greater increases of the transmission capacity of wireless systems.

The current wireless local networks ("Local Area Networks (LANs) ") operating in the ISM frequency band of around 2.4 GHz offer transmission capacities around 11 Mbit/s per carrier frequency. The so- called HIPERPLAN/2 systems are suitable for information transport of up to 54 Mbit/s per carrier frequency in the 5. 2 GHz band, and currently a study is being made with regard to LANs capable of providing a transmission capacity of more than 100 Mbit/s at carrier wave frequencies far in excess of 10 GHz.

Wireless connections at high bit rates make it necessary to use relatively high carrier frequencies and small radio cells. A base station fitted with an antenna is needed for each of the cells, and the high transmission rates enable an advantageous transfer of information signals to the base stations via optical fibre links.

In order to provide adequate coverage, a relatively large number of cells is needed even in house and small office buildings, which leads to an extensive wiring network for connecting the base stations associated with the cells. Accordingly, installing the wiring and extending the network should be as easy and as simple as possible.

Polymer-based optical fibres meet these requirements because of their relatively large core diameter and high numerical aperture and partly because of the fact that these optical fibres are easy to bend, split and connect to other devices. The limited bandwidth- length product of this type of fibre is a point of special attention in connection with the transportation of signals at a high bit rate. On the other hand, the distances indoors are relatively small, so that this limitation of this type of fibre as such does not need to prevent the use thereof in a cable network.

Multi-mode optical fibres, in particular polymer-based optical fibres, however are not suitable for the use of heterodyne techniques, due to the spreading in the phase relations between the various propagation modes. 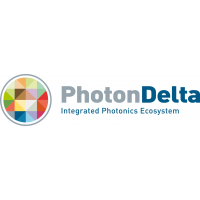 Send a request for information
to PhotonDelta