a novel herbicide has been discovered which inhibits photosynthesis with minor effects on respiration. The differential inhibition is attributed to the target of inhibition: the calvin cycle (carbon fixation pathway), and no

a novel herbicide has been discovered which inhibits photosynthesis with minor effects on respiration. The differential inhibition is attributed to the target of inhibition: the calvin cycle (carbon fixation pathway), and not enzymes involved in respiration.
Preliminary data demonstrates efficacy in plants (oats) and algea.
Project ID : 1-2012-369

We discovered that ornidazole, which is used to treat protozoan and anaerobic bacterial infections, abolishes photosynthesis and growth of cyanobacteria, green algae and plants at concentrations of 0.5-5 mM. Analysis of its mode of action revealed that rather than pre-activation by reduction of the nitro group and production of toxic derivatives and radicals as was reported for its action as a medicinal drug, ornidazole arrests photosynthesis by inhibiting two Calvin cycle enzymes, triose-phosphate isomerase (TPI) and glyceraldehyde-3-phosphate dehydrogenase (GAPDH). Although similar isoenzymes are involved in glycolysis and gluconeogenesis, ornidazole effect on respiration in-planta is moderate, thus raising its value as an efficient inhibitor of photosynthesis. The scarcity of Calvin cycle inhibitors able to penetrate through cell membranes suggests that ornidazole may be valuable as a herbicide with a different mode of action as compared to known herbicides currently on the market.

Weed resistance is a pressing issue for many growers across the world and therefore the abilityto identify and develop herbicides with novel modes of action is more needed than ever before.

(1) The effect on photosynthesis suggests that Ornidazole is a good candidate to become a novel herbicide.

(2) Ornidazole may now be modified to generate derivatives with higher efficiency and greater specificity.

(1) Ornidazole is a cheap chemical synthesized and sold by numerous chemical and pharrmacological companies.

(4) Efficient and fast inhibition of photosynthesis.

(5) Ornidazole acts against two novel targets . Hence, it could be used as an herbicide against resistant weeds. Moreover, the chance for raising resistant plants in natural populations against this compound that acts against two different targets, is low.

(1) The herbicidal effect of ornidazole in concentrations of 0.5-5 mM on cyanobacteria, green algae and plants has been proven in the pilot studies.

(2) The mechanism of action has been identified showing that arrest of photosynthesis and growth resulted frominhibition of two Calvin cycle enzymes,triose phosphate isomerase (TPI) and glyceraldehyde-3-phosphate dehydrogenase (GAPDH), which differs from its reported mechanism as a drug.

(3)Using computational tools we compared the docking of ornidazole at ferredoxin (electron carrier and efficient reductant) in Trichomonas and plants. This analysis pinpoints to hindrance in the docking at plant ferredoxin, which explains why ornidazole does not affect photosynthesis through reduction and generation of toxic derivatives or radicals.

(4)We purified TPI and GAPDH from cyanobacteria to enable study of their direct interaction with ornidazole. In parallel we have begun experiments for crystallization of the enzymes especially in complex with ornidazole.This would pave the way to rational design of ornidazole for further optimization of activity and selectivity. 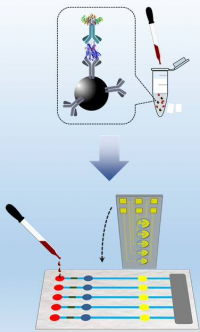