A high-throughput method for detecting allergens and viral infections

Allergies affect a large portion of the population, affecting life quality and can impose life-threatening conditions in some cases. The diagnosis of allergies is currently limited by expensive low throughput methods, presenting a need for high throughput methods for allergen detection. Professor Eran Segal and his team propose a novel highthroughput method (AllergenDetect) to detect thousands of antigens in parallel using synthetic DNA libraries expressed on phage display. Notably, the method can be employed to diagnose allergies, viral infection, and profiling the available human antibodies against the microbiome. 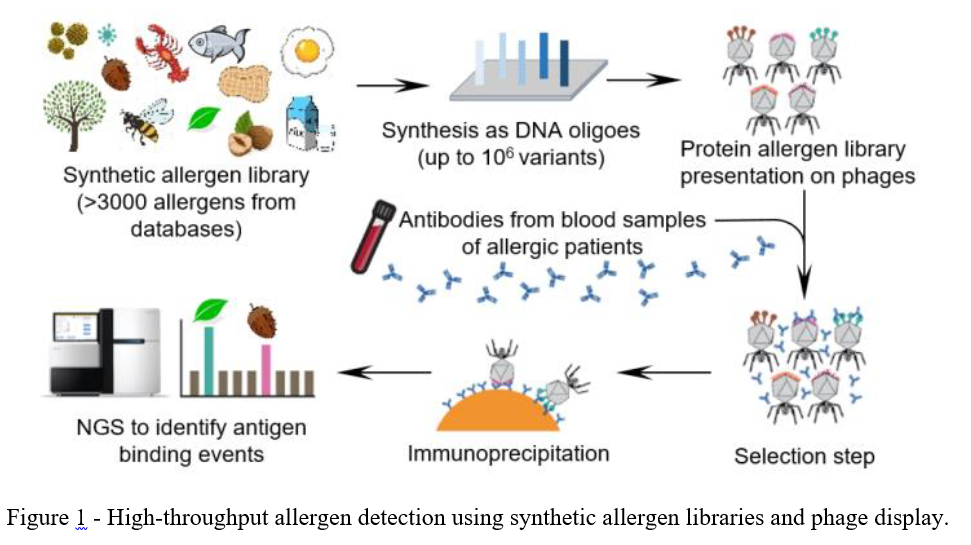 In the past decades, allergies have become a significant health problem, affecting approximately 20% of adults and more than 30% of children in developed countries. Notably, the incidence of food allergies is increasing worldwide, as well as their severity. Allergies impair affected individuals' life quality, and if undiagnosed, some food allergies can be life-threatening by causing an anaphylactic shock. Moreover, the diagnosis/treatment of allergies is a burden on health care systems, for instance the annual costs associated with food allergies in the U.S. are estimated at 24.8 billion USD.

Once diagnosed, substantial improvements in therapeutic options have made allergies well manageable. However, the diagnosis of allergies is still limited by expensive, low throughput methods. These methods usually rely on detecting the presence of antibodies, the mediators of allergies, against specific allergens. Therefore, they are performed separately for each allergen, making them costly and typically only available for a few dozens of allergens. However, several thousands of allergens have been reported in the literature (including more than 170 food allergens), clearly demonstrating the need for high-throughput methods for allergen detection.

Similar to the diagnosis of allergies, which is based on the detection of antibodies against specific allergens, diagnosis of viral infection can also be made by identifying antibodies against unique viral epitopes. Identifying a viral infection is vital for optimal treatment and epidemiological control, as demonstrated in the case of Covid-19.
Finally, identifying antibodies generated specifically against the microbiome can shed light on the complex interaction of the immune system with the microbiome. This may have profound implications for various aspects of human health, which are only now starting to be revealed.
Therefore, a method that can simultaneously detect thousands of antigens (allergens/viral/microbial epitopes) cost?effectively is highly sought after.

Professor Eran Segal and his team propose a novel high throughput method (AllergenDetect) to test more than 3000 protein allergens in parallel within a single test using synthetic DNA libraries expressed on phage display.
Notably, the method can also be employed for the diagnosis of viral infection.

The team developed a method that combines large DNA libraries (up to 55,000 variants) with a powerful phage display screening system, which is ideal for capturing the enormous diversity of the more than 3000 known protein allergens. In detail, the team synthesized all currently known allergens from several allergen databases as DNA and cloned them into a commonly used T7 phage expression system (Fig. 1). The allergens, cloned to be fused to a coat protein, are covalently linked to the phage’s surface. This phage library presenting the allergens is then mixed with blood (serum) samples of allergic individuals. The antibodies that cause an allergic reaction in the patients by binding the allergen will also bind to the allergen presented on the phages. The recognized allergens can be easily separated by washing away the unbound phages (selection step via immunoprecipitation in Fig. 1).
Finally, the allergens can be identified by DNA sequencing of the genomes of the phages that expresses them. The signal strength provides a semi-quantitative (relative) output of the amounts of antibodies present and hence a proxy for the severity of the allergy against a specific protein. Similarly, a phage display library with phages that express viral-specific peptides on their surfaces, can be used to detect the presence of specific antibodies against the virus in a blood sample, indicating of a viral infection. Importantly, the same concept can be employed for profiling the human antibodies repertoire against the microbiome, as demonstrated by the team.

The team led by Prof. Eran Segal designed and expressed a library of 3000 known protein allergens, as well as a library representing 244,000 peptide antigens of microbiota that was tested against the serum of nearly 1000 healthy individuals. A proof of concept data using a phage-based discovery platform for detecting antiviral antibody responses has been established.