From Vaccines to Testing, M2D2 is ‘Laser-Focused’ on the Coronavirus

---
This article was originally published on March 3, 2020, by Ed Brennen on University of Massachusetts Lowell's media portal. The article has been replicated on Innoget's Innovation Blog by Innoget's Editorial Staff for information purposes.
---

The announcement came in late June 2018, just as many people were turning their attention to Fourth of July cookouts and summer vacation plans.

The federal agency tasked with solving critical health threats to Americans has chosen the Massachusetts Medical Device Development Center (M2D2) as one of only eight business incubators in the nation to help startups develop means of eradicating influenza pandemics and other public health emergencies.

For the scores of biotech and medical-device startups affiliated with the UMass Lowell-based incubator, it was headline news that the Biomedical Advanced Research and Development Authority (BARDA) had selected M2D2 to join its new Division of Research, Innovation and Ventures (DRIVe) network – which includes access to $500,000 in public and private funding over five years.

Now, less than two years later, a global pandemic is here. As COVID-19 threatens millions of lives, the research and development work being done at M2D2 has taken on increased urgency and focus. 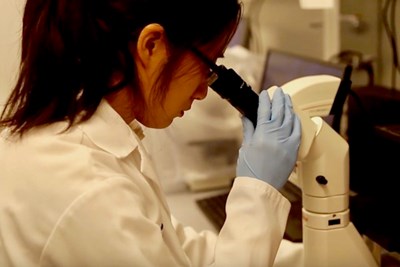 A collaboration of the UMass Lowell and UMass Medical School campuses, M2D2 has quickly aligned its efforts to help members of the life sciences innovation community identify funding opportunities (such as those from BARDA) to advance solutions for the coronavirus pandemic, from testing and detection to, ultimately, an effective vaccine.

“There’s been a tremendous shift in focus to all things related to coronavirus preparedness and disease response,” says M2D2 Co-director Nate Hafer, an assistant professor of molecular medicine at the UMass Medical School’s Worcester campus. “People are coming to us and saying, ‘I’ve got an idea. Who can you connect me to?’ And we’ve been doing that as rapidly as possible.”

M2D2 is home to 48 startups across its three sites – at 110 Canal Street and the Wannalancit Business Center in Lowell and at the UMass Medical School in Worcester – and is affiliated with more than 50 other companies around the world. In addition to medical device and biotech lab space, M2D2 provides resources and assistance for everything from funding opportunities and business development to clinical pathways and prototype design.

“We’re able to help these early-stage emerging biotech companies from an idea on a napkin all the way through to commercialization,” says Director of Operations Mary Ann Picard. “Right now, we are actively looking for technologies that are applicable to COVID-19.”

Racing for a Vaccine

One of those early-stage biotech companies is Versatope, which develops vaccines and therapeutics. Versatope has been working to develop a universal flu vaccine and was awarded a $17.9 million contract last fall from the National Institute of Allergy and Infectious Diseases (NIAID), a division of the National Institutes of Health (NIH).

In light of the coronavirus pandemic, Versatope has recently used its computational technology to design new vaccines for COVID-19.

“Pandemics have been a threat throughout history, but this moved so much faster than most people had anticipated,” says Versatope CEO Christopher Locher, who co-founded the company in 2017 and has worked in the infectious disease field for 30 years.

Versatope is actually taking two different approaches to a vaccine for COVID-19, which is caused by a virus known as SARS-CoV-2.

One approach is a spinoff of its flu technology, which involves replicating a portion of the spike protein on the novel coronavirus – the part that latches on to the human cell. That replicated portion is then attached to nano-sized vesicles, or recombinant outer membrane vesicles (rOMVs), that are made by Versatope.

The resultant vaccine, which could be rapidly synthesized and distributed, would create antibodies in a person’s system that block the spike protein of the virus. Versatope recently applied for supplemental NIH funding to begin making the genetic constructs of the vaccine, which Locher says is still in its early stages.

The second approach is based on structural biology. One of Locher’s colleagues at Versatope, Carlos Faerman, is an expert in molecular modeling. Faerman recalled a published paper on SARS-CoV-1, which is related to SARS-CoV-2, that mapped out its neutralizing antibodies.

What happens now with that design?

“We think we can use this polypeptide-based approach for a vaccine and start immunizing people to show that this approach is safe and well-tolerated. That’s our goal,” Locher says. “We’ve designed the construct. We know how to make it. It’s just a matter of getting the money to actually pay people to make it for us.”

Versatope has been exploring a public-private partnership for the vaccine funding – like it did when it partnered with Assoc. Prof. of Chemical Engineering Carl Lawton on a $1.75 million Mass Life Sciences grant to make nano-vesicles for its universal flu vaccine. Lawton is also the founding director of the Massachusetts Biomanufacturing Center (MBMC).

Locher moved Versatope from Boston to M2D2’s 110 Canal site two years ago – in part, he says, because of UML’s strong biotechnology program.

“We can hire students right out of school,” says Locher, whose team includes alum Lixia Wang ’01, who earned her master’s degree in biology from the Kennedy College of Sciences.

“Being at M2D2, with the core services of UMass, has been a huge help,” says Locher, who notes that in addition to the equipment that M2D2 has purchased to advance its biotechnology platform, one of the most important resources has been access to the UMass online library system.

“We have access to journals and databases that are not cheap,” he says. “We’re able to access a lot of information and resources at M2D2 that otherwise wouldn’t have been possible.”

NPT specializes in developing simple blood tests to rapidly detect bacterial pathogens and determine the most effective treatment. The company moved to M2D2 last March after receiving $500,000 in funding from Breakout Labs to support the development of its rapid antibiotic susceptibility testing for bloodstream infections.

“Like everyone else, we’re concerned (about the coronavirus) and we consider this really important work in these times,” says NPT CEO James McNamara, who left his tenured faculty position at the University of Iowa last year to found the company.

McNamara, who moved to the area when his wife took a job at Moderna Therapeutics in Cambridge, says M2D2 had everything he was looking for in a research incubator, at a cost-effective price.

“M2D2 has been a really rich and nurturing environment,” McNamara says. “They’re really helping to educate us and make us aware of various funding opportunities.”

NPT currently has a three-person R&D team, although McNamara says it is looking to expand in the near future. The company has also turned to UML for student interns. Hannah Bagley, a senior biomedical major from Townsend, started an internship with NPT in January.

To support the federal government’s coronavirus medical countermeasure efforts, BARDA is funding awards of up to $750,000 for COVID-19 diagnostics through its EZ-BAA program.

M2D2 also offers funding opportunities from its Center for Advancing Point-of-Care Technologies (CAPCaT) program, as a member of Johnson & Johnson’s JLabs network and through its annual $200K Challenge.

While many of the innovations are in early stages, it’s clear that M2D2 is channeling as many resources as possible to stop the spread of the coronavirus.

“People are laser-focused right now and brainstorming hard about how their slice of the health care or biomedical enterprise could be used to address this very acute crisis that we’re in,” Hafer says. “It’s amazing how people have come together.”

Vice Provost of Graduate, Online and Professional Studies Steve Tello, an architect of M2D2 in his prior role as vice provost of innovation and workforce development, is confident in what its dedicated researchers and scientists can achieve.

“The university’s support of M2D2 for the past decade has helped create an ecosystem that attracts innovative life science startups and researchers – people who are ready to tackle the challenge COVID-19 presents,” Tello says. “We are fortunate to have companies like Versatope and Nuclease Probe already working in this space on this campus. We all look forward to celebrating their successes.”