---
This article was originally published on April 9, 2020, 5 p.m by David Templeton  post-gazette.com. The article has been replicated on Innoget's Innovation Blog by Innoget's Editorial Staff for information purposes.
---

The overriding question in treating COVID-19 is whether such drugs as hydroxychloroquine or remdesivir — or multiple other drugs in the research pipeline — will make a difference?

So University of Pittsburgh researchers and UPMC have decided the time is right to test all of them at the same time through a revolutionary fast-track “learn while doing” method of conducting randomized clinical trials.

Announced at 11 a.m. Thursday, the UPMC-REMAP-COVID19 process was launched Thursday to treat COVID-19 patients with individual candidate drugs or in various combinations, all while an artificial intelligence program analyzes outcomes and determines the best treatment protocol.

The trial will determine whether specific drugs — or combinations thereof — represent the most effective treatment for COVID-19, with the chance of rolling in other existing or candidate drugs and treatment procedures that become available.

For now there are 97 people hospitalized with COVID-19 in the UPMC system, said Dr. Donald Yealy, chair of Pitt and UPMC’s Department of Emergency Medicine. Patients must consent to be included in the trial.

The project should begin showing a best treatment pathway with participation of as few as 100 patients.

So results are expected quickly, especially with a database of patients from countries worldwide also participating in the REMAP-COVID19 project, which still will follow guidelines for conducting human clinical trials.

In this case, patients will be assigned different drug recipes, with the idea that several drugs, each with some benefit, may maximize results, as determined through artificial intelligence.

“Those treatments doing best, even while the trial is still running, patients will get more often,” said Dr. Derek Angus, a professor and chair of Pitt’s Department of Critical Care Medicine. He was involved in developing the new methodology after the 2009 H1N1 influenza pandemic hit with no available treatments.

“Doing this at the point of care saves time, and it is specifically designed for safety and efficiency by learning on the fly with an artificial intelligence engine,” he said.

Pitt and UPMC led a global effort to develop the fast-track method and “address one of the most important debates during the COVID-19 pandemic: How should doctors decide between quickly adopting new therapies, such as the anti-malarial drug hydroxychloroquine and waiting until they are tested in longer clinical trials?” said a statement describing the project.

“The solution,” it continued, “is to find an optimal trade-off between doing something now, such as prescribing a drug off-label [for COVID-19 rather than malaria, for example] or waiting until traditional clinical trials are complete,” Dr. Angus said.

With that goal in mind, the team decided to employ “an adaptive clinical trial model that relies on a type of artificial intelligence known as reinforcement learning to identify the best, evidence-backed therapy for COVID-19 much faster than using the traditional scientific approach,” he stated.

For nearly a century now, randomized clinical trials have represented the universal standard for testing the safety and efficacy of new drugs and treatments, with one group receiving a new treatment and the other receiving the current standard of care — the accepted procedure for treating that ailment.

With no proven antiviral treatments or cure for COVID-19, that standard largely includes medications to ameliorate symptoms along with oxygen in severe cases.

Clinical trails typically have patients selected for each group at random and neither patient nor doctor typically know who is receiving what treatment, to eliminate bias. That’s not practical in this more complicated clinical trial, but computer analysis and the use of multiple drug combinations are expected to help eliminate any bias.

Such trials usually are done in three phases, initially to determine safety and ultimately to determine efficacy. But that can take many millions of dollars and years to complete — far too slow for those with the disease and especially so with a pandemic underway. It’s a key reason why a trial for the COVID-19 vaccine, even on a fast track, could take a year to 18 months.

Dr. Angus compared the REMAP procedure to a chef deciding to serve various courses in different combinations, all in different portions with different options, sometimes leaving out an appetizer or dessert, “and adjusting on the fly as plates come back scraped clean or barely touched, until hitting on a combination that sells best.”

“In a pandemic, doctors will not have the time to debate the pros and cons of every possible clinical trial,” he said. “By building this one-stop solution at the point of care, we are rolling out an approach that can assure that every patient admitted with COVID-19, if they choose to, can be enrolled in the program.

“We must throw out old ways of thinking and fuse clinical care and clinical research into one extremely efficient system,” said Dr. Angus, who authored a March 30 viewpoint published in the Journal of the American Medical Association advocating for the learning-while-doing approach.

“The world faced a similar epidemic in 1918, and millions died,” Dr. Angus said in his JAMA commentary. “And now facing another, it is useful to reflect that physicians tried to treat the Spanish flu with quinine. A century later it is shocking to still be asking the same question about the same drugs. An integrated approach of learning while doing is essential.”

The UPMC-REMAP-COVID19 procedure will be available across UPMC’s 40-hospital system, beginning with multiple treatments being tested simultaneously in different combinations.

Drugs in play will include “hydroxychloroquine, steroids and medications called immunomodulators that alter the responsiveness of the immune system” with the ability for new drugs requiring testing to be “rolled into the platform as study amendments, rather than tested in separate free-standing trials.”

“All participants will receive the current standard of care, and most also will receive one, two or three of the experimental treatment options,” Dr. Angus said.

Ultimately, only 12.5% of participants “will be assigned to the placebo arm of the trial,” meaning they will receive only the current standard of care. But within weeks, he said, “researchers expect that about 99% of patients will be receiving one or more active therapies specifically targeting COVID-19.”

The project is connected to the worldwide “REMAP-CAP,” giving it access to international results.”

“REMAP-CAP is enrolling patients with COVID-19 in North America, Europe, Australia and New Zealand, and expanding rapidly,” it states. “The trial design uses a machine-learning model that incorporates data from patients enrolled across the world to continuously learn which therapies and combinations of therapies are performing best,” stated Scott Berry, president and senior statistical scientist of Berry Consultants in Austin, Texas.

He worked with Dr. Angus and his colleagues to build the statistical model for the clinical-trial process. 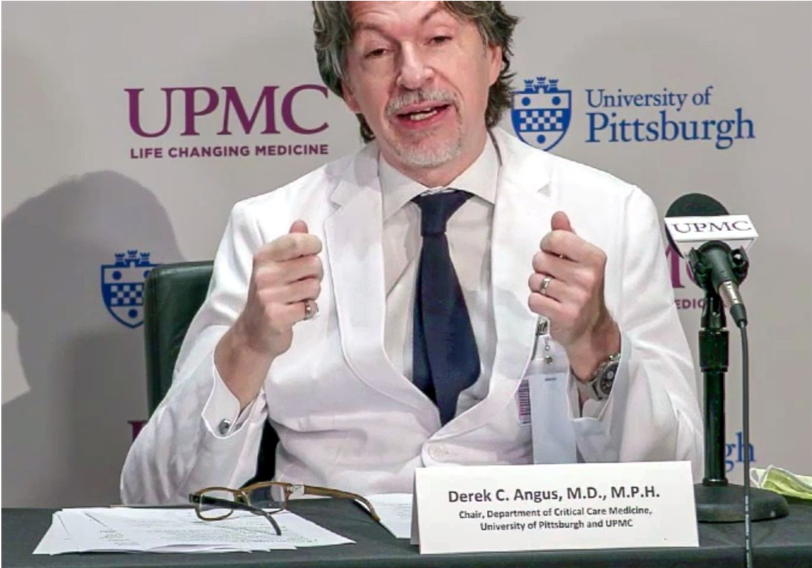 “Last week, the chief medical officer of the United Kingdom’s National Health Service urged every hospital in the country to participate in this trial,” he said. “As more institutions join, the model learns faster. If one of the treatments shows early signs of performing better than the others, patients are automatically enrolled more often into that treatment option.”

He said that “physicians can be assured that they are always betting on the winning horse in the moment, and poorly performing options are quickly discontinued.”

“This allows us to always rapidly identify which treatment works best” and “to get the best treatment to the most patients right out of the gate,” Mr. Berry said in the statement.