The Barcelona-based company Innoget, selected as a European partner to lead international cooperation in technology development between Spanish and Canadian companies

The company, which owns the largest open innovation network Innoget.com, is organizing a symposium on November 19th in Barcelona with the main goal of facilitatingconnections between companies from both regions. 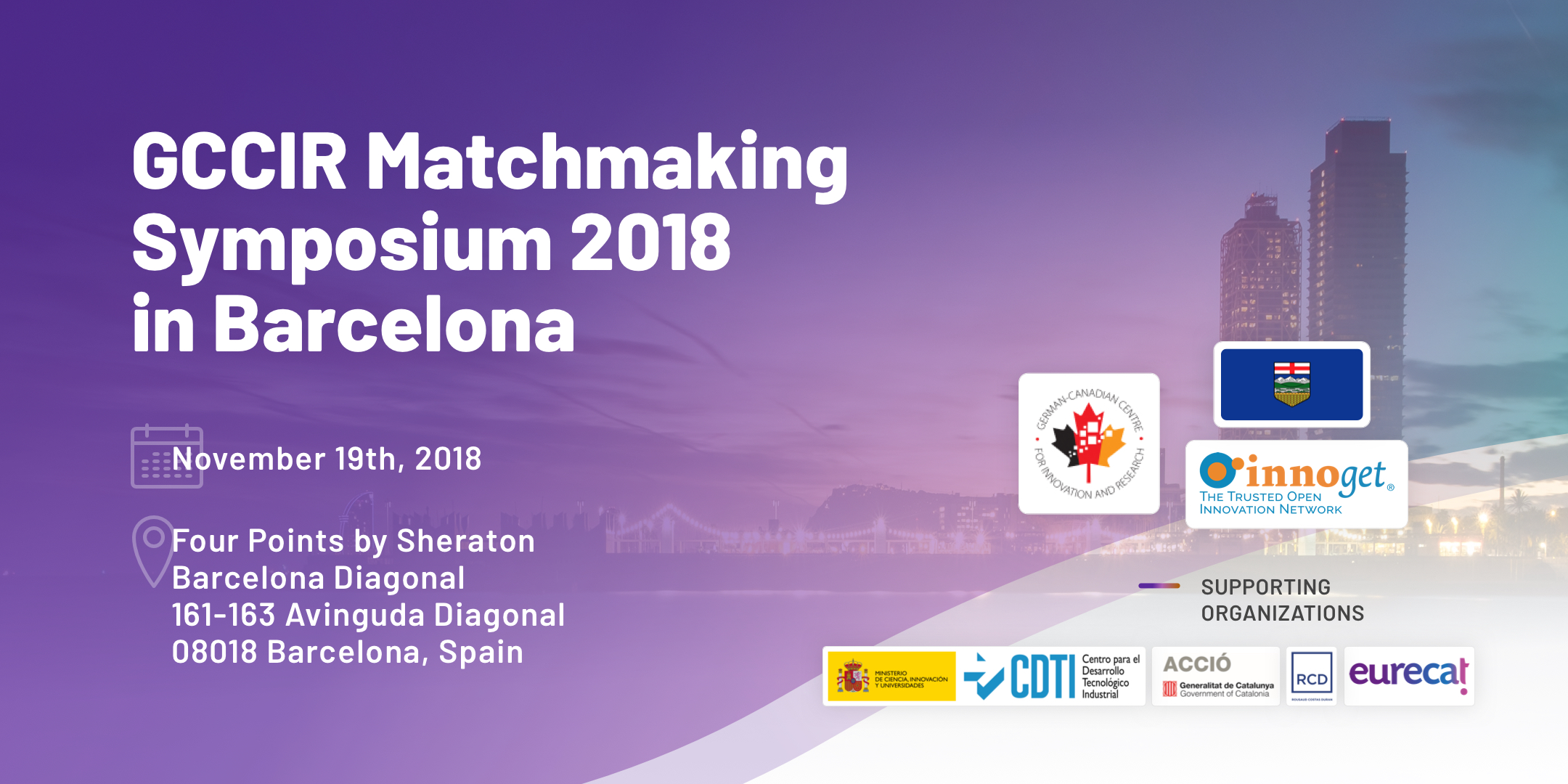 The Spanish company Innoget, known globally for its open innovation network for technology transfer and technology scouting Innoget.com, has been selected as a European partner for the organization of the symposium 2018 GCCIR Matchmaking Symposium to be held on November 19th in the city of Barcelona. The main goal of the event is to develop collaborative R&D projects under the Alberta-Europe Technology Collaboration Fund, as well as other funding programs to be presented over the course of the session.

The symposium is organized by Innoget, along with the innovation and research centre of the Canadian province of Alberta, the German-Canadian Centre for Innovation and Research (GCCIR), and is supported by the CDTI, the Centre for the Development of Industrial Technology. Entrance to the event is free and is intended for all those Spanish companies and organizations related to the Geospatial, Health and Biotechnology, Automatization and Robotics, ICT, Resource and Materials sectors. Likewise, 14 companies from Alberta related to these industrial sectors will attend the symposium aiming to find Spanish partners to develop projects for international technological cooperation.

According to Innoget’s CEO, Mr. Jordi Ràfols: “After the great results in other European cities, Innoget and the Government of Alberta bring the symposium to Barcelona because of being one of the most important innovation hubs all over the country, and Europe”, pointing out that “the participation in the symposium is a unique opportunity for all the Spanish organizations where they will connect with Albertan partners as well as will identify new cooperation opportunities in several technology areas.”

From the GCCIR side, Dr. Katelyn Petersen, Manager, says: “There are several reasons why we decided to bring a delegation of Albertan companies to Barcelona. Being one of the largest economies in Europe, Spain has excellent cutting-edge companies in a variety of sectors. Barcelona, in particular, is a city that thrives economically and is home to many innovative small and medium-sized enterprises. We believe that the Barcelona Symposium will be a good opportunity for Spanish and Albertan companies to come together and see if there is a potential for joint technology R&D projects that will benefit all partners and create new synergies.”

Over the course of the event, which is scheduled to last for half a day, and for which many companies have already registered through the official website gccirsymposium.innoget.com, several funding tools will be presented for Spanish organizations in order to make international cooperation effective. There will be a pitching session intended for the companies to present their profiles, followed by a networking session between the attendees. At the end of the event, the companies will be able to continue their conversations, while enjoying a tour that will visit some of the most important research and technological facilities in Barcelona related to the industrial sectors above.

Founded back in 2006, Innoget now operates in more than 180 countries and concentrates the majority of its activity in Europe, North America and Asia. The company has received several international awards, takes part in European projects related to technology transfer and open innovation, and collaborates with innovation referents in the private market, like PepsiCo, Haier, Electrolux, FrieslandCampina and Bonduelle.

Innoget manages a database of daily users that range from F500s to Startups and Spinoffs, including Universities, Large Enterprises, SMEs and researchers. The core mission of the company is to facilitate technology transfer and knowledge online, through the self-managed free-access network.

Business opportunities in the province of Alberta

With a total population of roughly 4.28 million and a GDP of Euro 205 Billion, the province has shown 2.9% economic growth in 2017. Alberta presents business opportunities in the energy, natural resources, ICT, nanotechnology and life sciences sectors.

Innovation and an ecosystem of partners are crucial in our mission to Advance Energy Together, providing cleaner energy for all. SHV Energy launches an open innovation portal to find new partners to co-develop innovative solutions, find new ideas and create mutual opportunities. As a global energy group we recognise, and embrace the challenge to continue to provide essential energy solutions to off-grid customers that are envir...

In the framework of this collaboration, we have issued a new challenge to the innovation ecosystem, focused on the digitalization of the circular economy flow. Currently, there is a growing demand in the market for packaging containers or products elaborated from recycled materials. Thus, we need to identify solutions that help us certify that the raw materials we produce from waste at the Valoriza Servicios Medioambientales (VSM) plants are i...

EINST4INE - The European Training Network for Industry Digital Transformation project will explore various aspects of #digitaltransformation spread across interconnected research areas such as: ...