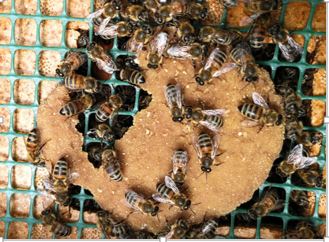 About the Start Up

APIX Nutrition has been established by two of the worlds’ leading authorities on bee nutrition who seek to commercialize their work, and that of an international research team involving The Hebrew University of Jerusalem (Israel) and the Universities of Oxford and Newcastle (UK) that, after 7+ years’ work, has resulted in a new feed formulation for honeybees that is demonstrably superior to any of those presently on the market.

Domesticated honeybees play an important role in human food security through their services as crop pollinators and through the production of honey, wax and royal jelly. Unlike most other livestock under intense production, honeybees mainly feed themselves by collecting floral pollen and nectar. However, in areas where there is not enough flowering plant diversity and abundance, beekeepers have adopted the practice of routinely feeding bees with substitutes for pollen composed mainly of seed flours and sugar. The market for honeybee feed is global and worth an estimated £1 billion (sterling). Yet the feeds presently available (mainly of US origin where there is a burgeoning market) are generally of poor quality and do not provide honeybees with an optimized diet akin to that achieved naturally via the consumption of pollen and nectar. Consequently, present feeds are commonly supplemented with ingredients (such as pollen) by beekeepers in an ad hoc manner in a bid to make them more palatable/nutritious.

The goal: to raise the working capital required to register and produce the company’s first product, a novel superfood for honeybees providing a complete and balanced diet. To establish the required operational/marketing platform to drive sales in the US and Southern Europe/UK/Israel to deliver a targeted £20 million (sterling) t/o within 6 years of the launch of our product via a combination of direct sales and distribution partnerships. To developfurther products already in the pipeline. New production method of a hormone that Induces Spawning in Carp

Genetically Modify the Scent of Flowers, Yeast, and other Organisms

Root phenotypic plasticity is a major factor allowing plants to adapt to their ever changing environment. Although this fundamental issue is of great agricultural importance, studying root plasticity is highly complex due to their hidden nature. We present an automatic system for monitoring root growth and tropic responses (3D spatial coordinates and kinetics). The system is suitable for high throughput applications (mutant screening or physiological responses over various stresses or genotypes) with young seedlings in transparent media. It provides near diffraction resolution, enables dynamic analysis and can be further developed for the detection of fluorescence luminescence signals within the root. Project ID : 1-2012-353