The present invention relates to an axial flux switched reluctance machine, comprising at least a stator with poles distributed along a first circumferential path on a plane with electromagnet coils wound on at least some of the stator poles. Partners to further develop the machine and/or to establish commercial agreements along with technical cooperation are sought. 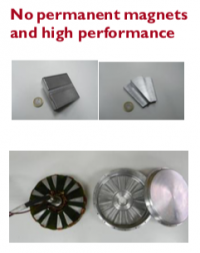 The present invention relates to an axial flux switched reluctance machine, comprising at least a stator with poles distributed along a first circumferential path on a plane with electromagnet coils wound on at least some of the stator poles.
Partners to further develop the machine and/or to establish commercial agreements along with technical cooperation are sought. 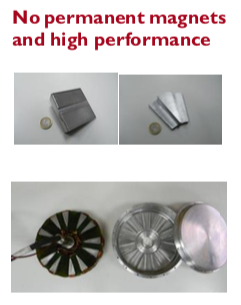 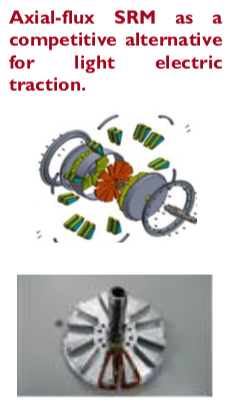 Since 2011, the abrupt increase of the raw material costs in rare earth permanent magnets has shifted interest in the field of electrical machines towards new topologies with a lower volume of permanent magnets, and even without those. This circumstance has renewed the interest for switched reluctance machines, especially in the field of electric traction.

SRM present some advantages, such as simple and robust construction and torque-speed characteristics that match very well with the needs of electric traction. However, conventional radial SRM drives have drawbacks as, for example, lower performance than permanent magnet synchronous motors or brushless D.C. motors, high torque ripple and acoustic noise.

Axial-flux switched reluctance machine with a stator and one or more rotors with a particular disposition of the stator and rotor poles with short magnetic paths andwithout flux reversal.

A first operational prototype has been built and tested.

Other: Licensing opportunity with technical cooperation

The machine is mainly stated for in-wheel electric traction but can be used in industrial applications such as fans, pumps and machine tools.

This invention is based on the application of a hybrid organic/inorganic treatment onto an exposed surface – either as a stand-alone treatment or as a sealant. The treatment is applied using an electrochemical deposition technique, allowing for the development of conformal coatings, irrespective of design complexity. Layer thicknesses are low (10-100nm) but resistance in corrosive marine environments indicate corrosion rates comparable to technologies currently employed by the aerospace and automotive industries. Corrosion rates are reduced by between 103 and 105 times, dependant on the nature of the porous coating. Tests on metallic coatings indicated a reduction in corrosion rates of approximately 103-104 while tests on ceramic coatings indicated a reduction in corrosion rates of approximately 105. By applying the hybrid treatment as a sealant treatment onto a porous wear resistant coating, concerns regarding the effect of mechanical damage are dramatically reduced. In addition, surface roughness levels are similar to electropolished finishes.

Magnetic cores in amorphous state are usually produced by placing together very thin amorphous ribbons from a material obtained by the melt-spinning technique. The new patented method produces the amorphous material by mechanical alloying, a traditional process in the powder metallurgy field. This technique allows a higher control on the amorphisation process and the properties of the amorphous obtained powders. These powders are then consolidated by the very quick process known as Electrical Resistance Sintering (also Electrical Discharge Consolidation/Sintering can be used). A final amorphous material, without the typical frontier between ribbons of melt spinned materials, which clearly affect properties, is obtained. 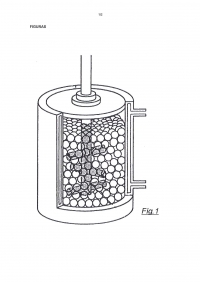 The conventional method of press followed by furnace sintering is now substituted by an electrical consolidation method. This allows joining in a single step the previous pressing/sintering processes, and, due to the promptness of the process, the use of controlled atmospheres is not necessary. The steps of magnetization, and eventual thermal treatments, can be carried out in the same container, without being necessary to manipulate the product.

Lateral connection system by removable clamps for I or H profiles

The presented system allows detachable lateral connections, at right angles, type ‘cross beam to column flange’ of I and H standard profiles made of steel. The system uses standard mounting clamps without previous specific machining operations (as may be welding or drilling).

This removable connection system can be adapted to the size of the section, by adjusting the length of the connecting bolts, using the same flanges. Is usable for a wide range of standard profiles, which avoids the need for a flange size for each profile section.

Sign in to Innoget to connect with Servei de Gestió de la Innovació and other leading innovators and researchers that matter.