The converter has an input for connecting a monopolar DC source and a bipolar DC output, with the same voltage but with opposite polarities. It is useful for the connection of a distributed generation system to a bipolar DC grid. For these applications, the proposed topology is a solution with sufficient guarantees of reliability, quality and performance. The converter circuit is very simple, it includes three inductors, four capacitors, two diodes and a power switch as a switching device.

The converter has an input for connecting a monopolar DC source and a bipolar DC output, with the same voltage but with opposite polarities. It is useful for the connection of a distributed generation system to a bipolar DC grid. For these applications, the proposed topology is a solution with sufficient guarantees of reliability, quality and performance.
The converter circuit is very simple, it includes three inductors, four capacitors, two diodes and a power switch as a switching device. 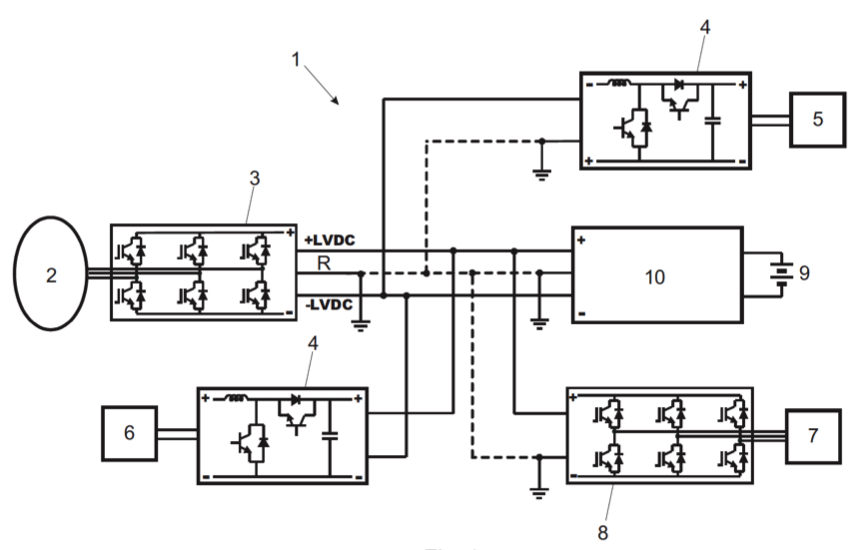 This invention relates to a DC-DC converter capable of generating bipolar voltage with a suitable novel topology for distributed generation connection to a DC bipolar grid. The proposed topology uses only a power switch, unlike other DC-DC converters which employ two or four switches. Thus the complexity of the converter is reduced.
The DC-DC converter with bipolar output has an input for connection to a monopolar DC source and a bipolar output voltage with a positive terminal and a negative terminal. The DC-DC converter includes a power switch (e.g. IGBT transistor, a MOSFET transistor), three, inductors, four capacitors, and two diodes. A snubber circuit can be added for clamping voltage overshoot on the switch.
The DC-DC converter can be applied to bipolar DC grids because it allows the connection of a monopolar DC source to such networks. The present invention is especially applicable in the industrial sector and renewable energies. In the first because this network type is an alternative to classic electric system, currently, of interest special in the industry. In this sector, the proposed converter can control the voltage level and possible unbalances of the DC voltage network. On the other hand, in the renewable energy sector, the proposed scheme enables the connection of generation and storage systems to a bipolar DC network in a way reliably. The proposed topology is a solution for these applications with sufficient guarantees of reliability, quality and performance.

The new materials have the following advantages over existing materials in supercapacitor’s sector:  Supercapacitive properties: they have specific capacitance values much higher than those obtained by commercial nanostructured carbon electrodes.  Low cost: obtained by a chemical process of a single stage, with a single precursor, at low temperature, and highly available, non-polluting and low cost materials.  Good cyclability: testing in cyclability is promising in terms of electrochemical and mechanical stability. In parallel to its advantages as supercapacitors, the nanocomposites show the advantages associated with the following additional properties:  Giant magnetoresistance, GMR: this property is observed at room temperature, and high magnetic fields are not needed.  Source of carbon nanoforms: based on the nanocomposite, can be obtained a mixture of carbon nanoforms consisting of nano-onions and multi-walled nanotubes.

Nowadays there are devices that allow the control of devices connected to a network from the own network. The classical method to access them from a different network is the redirection of the corresponding TCP or UDP connections to local networks from the border router. The redirection requires a high level of expertise in communications to be performed. Another strategy that is often used is the creation of VPN (virtual private network). This technique allows the control of access but does not allow connections to be discriminated or the management of power supply. The proposed system allows you to control the person and the moment to access as well as the free access. The modification of these constrains can be performed in the course of an access session. In addition, the system allows the control of power supply of the device you want access to. The interface is very friendly and does not require continuous changes in the configuration of the router. The system has a local database access control and validation can be delegated to other servers using protocol validation like LDAP, IMAP, POP3, etc.

The research group "Electronic engineering applied to renewable energy systems", has developed controllers and communications systems for power electronic converters that operate as an interface to the power supply systems in order to improve power quality, to facilitate the efficient use of energy and to impulse the expansion of smart grids. The group is looking for technical cooperation agreements.

High Temperature superconducting wires on SapphireRisk management of the effects of solar activity: Device and procedure of obtaining in real time and high resolution, the Local Geomagnetic Disturbance at middle latitudes.Possibility of identifying nautical headlights at the distance that reaches the light if the headlights.AUTONOMOUS DETECTION AND SIGNALING CROSSWALK SYSTEM

Sign in to Innoget to connect with University of Huelva and other leading innovators and researchers that matter.